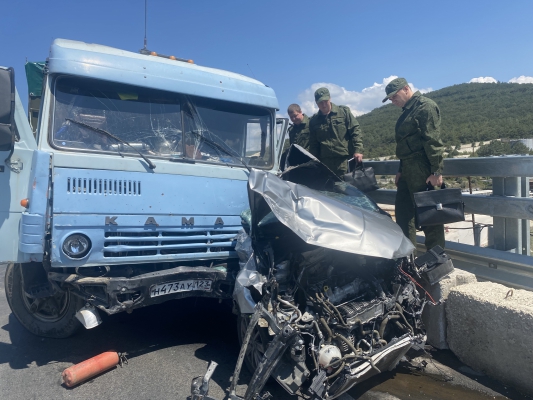 A resident of Krasnodar, who lost her husband in a terrible accident near Sevastopol, turned to the President of Russia. This is reported by Krasnodar No. 1|Teletype.

Recall that on August 4, in the area of ​​​​the Sevastopol village of Sugar Loaf

involving 9 cars and 2 trucks. The apparent cause of the accident was the failure of the brakes at KamAZ. On the fact of a fatal accident, the Investigative Committee opened a

My husband died in this accident. In an instant, my life and the life of my three minor children turned upside down , — the woman writes.

Indeed, one person died in this accident — the Volkswagen, in which the -year-old Krasnodar was driving, flared up from the impact. The man could not get out of the wrecked car and was burned alive.

The Investigative Committee conducts examinations, checks the fleet of the enterprise, the truck of which became the root cause of the tragedy. But questions remain. And we understand the condition of a woman whose life was suddenly divided into “ until August 4 41” and “ after«. And she rightly asks and threatens:

Why are heavy trucks allowed to drive along the highway, which has a dangerous long descent? Why has the unfinished track already been opened? Why is there no trap strip in this dangerous area for such cases?

Why are there no traffic police officers who control heavy trucks so that they do not violate traffic rules? Why is there no detour for heavy trucks on a route that is safer for them?

This is not the first case of trucks in this area. My husband cannot be returned… But I don’t want anyone to experience the same grief as I do now.

I ask you to look into this situation and punish all those responsible, since I also consider the administration of Sevastopol to be guilty, which did not ensure safety on this section of the route.

This letter was written to the President of the Russian Federation, but I feel that I will not wait for an answer. But I will not leave this matter so easily!

Will there be answers to these questions, not even now, but when the investigation is completed …

Find out more:  Crimean football teams in the Russian championship. The process is not fast.