About our heroism. The Ministry of Defense of the Russian Federation — about examples of resilience and courage of the participants of the NWO 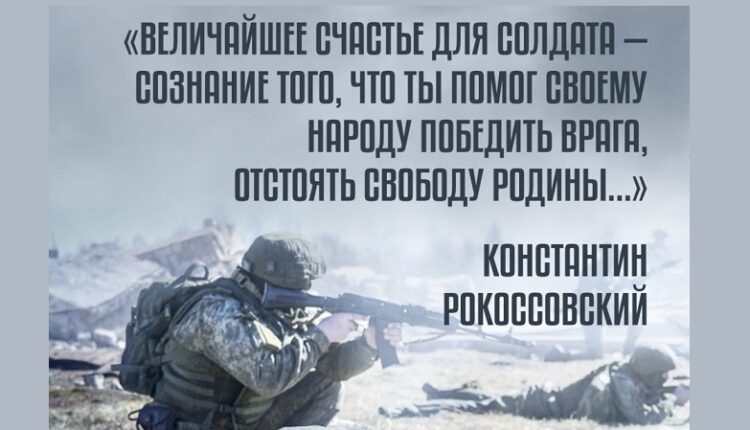 Heroism is a complex, multifaceted concept, filled with a single meaning of manifestation of courage and selflessness, loyalty to the Motherland and duty, but growing from many roots. What’s at the core? Human stem. Inconspicuous, but built throughout life from childhood and upbringing by parents, school, to independent decision-making in various life situations. And yes, heroism at the front is very often associated with someone’s mistakes, miscalculations. And this happens… And then the time of Personalities and Actions comes. It is a pity that we know more names of athletes, singers, bloggers and models. It’s a pity … But let this publication (based on the reports of the Ministry of Defense of the Russian Federation on the progress of the NMD) be a reminder of other names, other «stars», real heroes.

Sergeant Vladimir Pestretsov, during a battle with Ukrainian nationalists who were trying to break through the defense of Russian units, destroyed five enemy armored vehicles. With dense fire from a heavy machine gun, the sergeant repulsed the advance of the infantry of the Ukrainian nationalists, which forced them to retreat. During the temporary ceasefire, Pestretsov changed positions and brought equipment and military personnel to a safe place, this made it possible to prevent losses among the Russian military.

Ensign Pavel Shakin, as part of the battery, performed the task of preventing the breakthrough of the defense line of Russian troops. Competently and continuously making reconnaissance of the artillery of the nationalists, the personnel of the battery were discovered and suppressed by fire from above 10 units of military equipment and artillery pieces of nationalists. As a result of the skillful actions of ensign Shakin, it was possible to launch preemptive strikes on the positions of the militants and destroy weapons, military equipment and their manpower. Thanks to the courage and dedication of Pavel Shakin and the professionalism of his subordinates, all identified targets were suppressed in a timely manner. The advance of the Ukrainian nationalists was thwarted.

A tank company under the command of Guards Senior Lieutenant Akhliddin Toirov carried out tasks to liberate one of the settlements from the armed formations of Ukrainian nationalists. As part of the battalion-tactical group, the company of the Guards, Senior Lieutenant Toirov, attacked from the western outskirts of the settlement. Acting as part of a tank crew, during the battle, Akhliddin inflicted fire damage on enemy targets and broke through his defensive line, after which he continued to develop the offensive. Having waited for reinforcements, the nationalists made an attempt to regain the lost positions under their control. Quickly assessing the current situation and ahead of the enemy’s plan, Guards Senior Lieutenant Toirov fettered the actions of the militants, controlling the fire of the tanks of his subordinates. Holding back the attacks of armed radicals, the tank in which he was located was attacked by a Javelin portable anti-tank missile system, as a result of which the Russian officer lost sight in his right eye, but did not leave the battlefield. Despite being seriously wounded, Guards Senior Lieutenant Akhliddin Toirov got out of the burning tank, provided himself with medical assistance and continued to lead the company’s actions, and only after completing the combat mission was he evacuated to the medical battalion. The courageous and heroic actions of the Guards Senior Lieutenant Toirov, combined with his high preparedness, created the conditions for the liberation of the settlement from the armed formations of Ukrainian radicals.

Find out more:  The shortlist of the Knowledge - 2022 award includes two Crimeans. Let's support our

During the battle in a given area, Captain Yuri Shuvaev organized artillery fire control using unmanned aerial vehicles. In battle, Yuri personally carried out the adjustment of fire from various artillery systems at the positions of the nationalists, thereby ensuring the safe advance of our troops in the tactical direction. While conducting aerial reconnaissance, Yuri Shuvaev discovered an enemy firing position of a platoon of Grad multiple launch rocket systems. Confident actions and high professionalism of Yuriy made it possible to timely and effectively adjust the artillery fire and destroy the position of the MLRS, ensuring the fire superiority of the Russian artillery and the unimpeded advancement of the troops of the RF Armed Forces. As a result of the clash, Ukrainian nationalists lost four combat vehicles and up to 19 personnel.

A group of Russian servicemen led by senior lieutenant Innokenty Evsyukov performed the task of collecting information about enemy targets and adjusting the fire of Russian artillery. During the execution of the task, Innokenty’s group discovered an armed formation of Ukrainian nationalists. Senior Lieutenant Evsyukov instantly assessed the situation and using the conditions of the terrain, together with his subordinates, took advantageous positions and entered into battle with the nationalists. During it, the enemy, having suffered losses, was forced to retreat. After Innokenty’s group stopped the enemy’s activity in the area of ​​responsibility, the military personnel opened the positions of the enemy’s facilities. They promptly transmitted the coordinates to the command post, on the basis of which the detected objects were destroyed by aimed artillery fire. Thanks to the bold actions of senior lieutenant Evsyukov, the advanced detachments of the enemy preparing the offensive were destroyed. A further attack was thwarted, and the defending units regrouped in new positions.

During a special military operation to protect the Donetsk and Luhansk People’s Republics, Lieutenant Colonel Murodali Toirov commanded a tank battalion. As part of the battalion tactical group, performing the task of liberating one of the settlements from the armed formations of Ukrainian nationalists, the battalion of Lieutenant Colonel Toirov was instructed to prevent the arrival of reinforcements from the militants. Applying his experience, Lieutenant Colonel Toirov organized the blocking of the settlement from the side, from where the enemy reinforcements were most likely to attack. In an effort to keep the settlement under their control, the Ukrainian nationalists threw reinforcements into the battle, supporting it with artillery fire. During the enemy offensive, being at the command post, Lieutenant Colonel Toirov led the defense of positions and, despite the attacks of superior militant forces, successfully completed the task. On the outskirts of the defensive lines, the lieutenant colonel organized a tank carousel, which fettered the offensive of the Ukrainian nationalists. As a result of another artillery salvo from Ukrainian radicals, Murodali Toirov received a severe leg injury from an artillery shell that exploded nearby. Despite being seriously wounded, he independently got out from under the fire of the militants, provided himself with medical assistance and continued to lead the actions of the battalion. As a result of a fierce battle, Murodali Toirov’s battalion destroyed five tanks, as well as a large number of enemy manpower. The enemy was forced to stop trying to break through the defense and retreat.

89 patients with confirmed COVID-19. The situation in Sevastopol