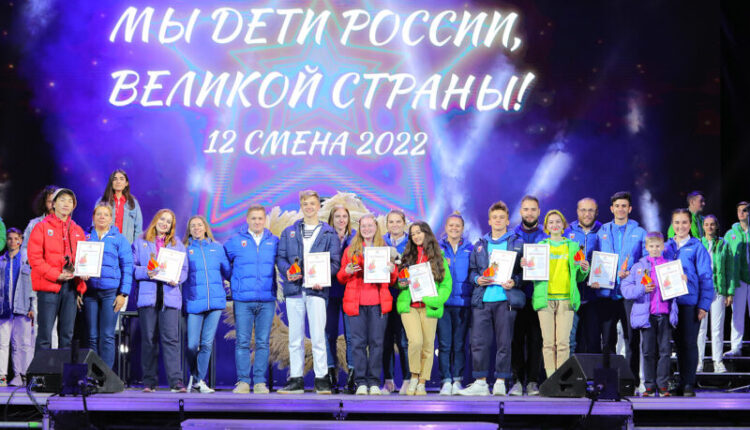 At the International Children’s Center the shift «We are children Russia, a great country! The change program was aimed at updating knowledge and emotional and value attitude towards Russia as a country of great achievements in science, culture and technology. At the «Meeting before parting» Artek traditionally gathered at the «Artek-Arena» to remember the brightest events and say goodbye to each other. More than three thousand children from 83 Russian regions and the Syrian Arab Republic took part in the shift, of which 416 schoolchildren from the Southern Federal District, including 416 children from the Republic of Crimea. At the “Meeting before parting”, the guys became spectators of the bright musical performance “The House of My Heart”, dedicated to love for the Motherland. The leitmotif of the performance can be considered the words that for each person Russia is perceived differently. But for everyone, Great Russia, like a heart, is one!

You lived together with you 12 day according to the laws of Artek: we tried to respect the elders, not offend the younger ones, listened to our teachers, studied, worked. We were all friends! And also — they were proud of their country, their homeland, Russia , — addressed the participants change director of ICC «Artek» Konstantin Fedorenko.

In his greeting, Konstantin Fedorenko referred to the words of the President of the Russian Federation:

The parade at the Artek-Arena was held by the winning squads of specialized competitions. By tradition, at the closing ceremony of the shift, the best representatives of each camp were congratulated on the presentation of the main Artek award. Based on the results of the 12 shift 2022 of the year for high personal achievements, successful participation in the camp programs, respect for peers and the Artek community, the Star of Artek public recognition badge was awarded to:

Twelve-year-old Alexander Polny from Simferopol (Republic of Crimea) came to Artek for the first time. He received a ticket for success in football, and the boy is also engaged in choreography.

I prepared a dance and a game for the Star of Artek competition. I think the ability to communicate with people and kindness helped me win. During the shift, I made new friends, I tried new activities, I learned a lot. I really liked the site of the partners of the Big Change competition, where we went. Artek has become my second home. I wish everyone to believe in themselves and never give up , — says Alexander.

Find out more:  The President of Russia called all the participants of the NWO heroes

Class. I believe that aspiration, sociability and the ability to speak in public helped me win. During the shift, I learned to find a common language with people of different interests and achieve my goals. She also mastered the tourist direction, learned to knit and navigate the terrain. Most of all I liked and remembered the ascent to Ayu-Dag and various thematic competitions. «Artek» became my second home.

The bright event of the shift was the final of the All-Russian competition «Big Break». At the closing ceremony, for the first time, the absolute winners of each of the challenges of the competition were announced. The guys received unique prizes — trips around Russia, trips to the North Pole on a nuclear icebreaker, internships in the projects of the Tavrida art cluster, a visit to the cosmodrome, admission to railway universities according to the target set … Winners among students 11 steel grades 300 people they got by 1 million rubles for education and additional points to the portfolio of achievements when entering universities. 300 students 9- classes — by 21 thousand rubles for education and self-development.

4 November Artek, together with all of Russia, celebrated National Unity Day, a holiday that symbolizes the unity of our vast country. Pupils of the children’s center that day became participants in a large festive fair and were able to dance dances, play games of different nations, try their hand at pyrography, phytodesign, beadwork, ceramics, Khokhloma painting, create a postcard from Artek for their relatives and much more. A bright event of the holiday was a concert program with the participation of invited artists and a dance flash mob.

orientation in the area.

Schoolchildren participated in the bibliomarathon «Polyphony of the Native Land»; the finals of the All-Russian competition of environmental initiatives «Eco-Artek» and environmental campaigns; TRP festival; represented at the contest «I’m proud of you, Russia!» their creative projects, dedicating them to history, culture, outstanding personalities of Russia, achievements in science, sports, and culture. And the guys also participated in the international educational campaign — the Great Ethnographic Dictation; together with a connoisseur of the elite club “What? Where? When?» Yuri Filippov played an intellectual game; mastered the Greco-Roman style of wrestling with world champions, brothers Artem and Maxim Surkov; watched the winning films of the Golden Fleece Film Festival and met with their creators. And, of course, they won various competitions and presented their creativity to new friends.

At the “Meeting before parting”, according to the good Artek tradition, as a sign of friendship, the boys gave roses to the girls. Saying goodbye to their squad and the children’s center, the shift participants took the addresses of new friends, new knowledge and unforgettable emotions from Artek.

Rosvodresursy predict the growth of agriculture in the Crimea