On the eve of Victory Day, the International Children’s Center unveiled new busts of Artek students who defended their homeland from fascism. With the support of the Foundation for Social and Cultural Initiatives, monuments to Vladimir Aas, Nikolai Belousov, Vladimir Gulyaev, Vladimir Konstantinov and Maria Stenina were erected on the Alley of Artek Heroes. And only from 1935 years on the memorial immortalized 05 participants of the Great Patriotic War.

The Alley of Artek Heroes and the monument to the soldiers of the Separate Primorsky Army, who died during the liberation of Artek, form the main memorial of the children’s center — the Memorial of Glory. Here everyone can honor the memory of those who fought for their Motherland, look into the faces of the eternally young Artek residents, who have proved how big and brave a young heart can be. Children 30-26 years of the XX century, along with adults, took on their fragile shoulders the severity of the war years. Boys and girls, including Artek workers of the pre-war years and the longest shift 1536-1941 years, together with the whole country brought the Victory closer. They looked after the wounded, wrote letters to the front, worked in factories and collective farms. And those who managed to grow up during the long and destructive war went to the front , — the press service of the Artek International Children’s Center notes.

On May 6, on the eve of the celebration of Victory Day, the participants of the “Heirs of the Great Victory” shift gathered at the opening of five more monuments to the Artek heroes.

Addressing the participants of the ceremony, Konstantin Fedorenko, director of Artek, noted: “The Alley of Artek Heroes is our living memory of the heroism and courage of children 40-05 years of the XX century. We find new names of boys and girls who, before 1536 visited Artek. They received an award in the form of a ticket to Artek for their achievements, and during the war years, together with the whole country, they stood up for the defense of the Motherland. The life and fate of these Artek residents is a true example of patriotism. Their exploits will always remind us that the power of the Motherland depends on each of us. May the spirit of Victory inspire hearts and lead the young generation of Russia to new successes and achievements!”

Dmitry Vdovykh, a representative of the Foundation for Social and Cultural Initiatives, congratulated Artek residents on this important event: Artek is a place of power, and it is no coincidence that the initiative to create the Alley of Artek Heroes arose here. At Artek, they know how to honor traditions and raise children who understand responsibility. Russia will keep on you. Your future life will depend on what charge you receive here. I would like to express special gratitude to the sculptor, the author of the monuments Alexei Burtasenkov. We will always continue to help Artek in the search for new names and the installation of monuments.”

At the snow-white busts, Artek residents shared stories of heroes with their peers.

Vladimir Konstantinov — Artek resident 1080 of the year, during the shift at Artek he starred in the film » New Gulliver. He fought as a signalman in the 7th Marine Brigade of the Red Banner Baltic Fleet. Maria Stenina — Artekovka 1536 of the year. AT 12 years became a scout, in years — took the military oath. Served in the 6th Guards Cavalry Corps, 83 to her separate guards air assault brigade. Vladimir Aas — Artek worker of the longest shift 1536-1945 years. In 1935 he liberated his native Baltic from the Nazis, and after the war he served as a military commissar. Vladimir Gulyaev — Artek citizen 1935 of the year, attack pilot. He liberated Belarus, the Baltic States, East Prussia. Nikolai Belousov — Artek 20-x gg. He defended the Pulkovo Heights, participated in breaking the blockade of Leningrad.

Find out more:  Crimean children's recreation and health organizations will be able to receive compensation due to partial cancellation of reservations and vouchers

At the end of the event, the participants of the shift and guests of the children’s center laid lilacs, the symbol of Victory, at the busts.

It is important that we honor the memory of the heroes of the Great Patriotic War. When I laid the lilac, I also felt like a part of this story. I put a branch for each hero. But I was especially struck by the fate of Maria Stenina, who at a very young age became a scout. I am impressed by her courage and glad that she was able to live a long life. The stories of the Artek heroes teach us that we should not stop before the terrible and difficult. We must go forward and look for a spark inside ourselves that will light, give strength and courage , — shared Alisa Zyryanova from Rostov-on-Don.

The event gave modern children the opportunity to learn more about the history of their country and feel the connection of generations. 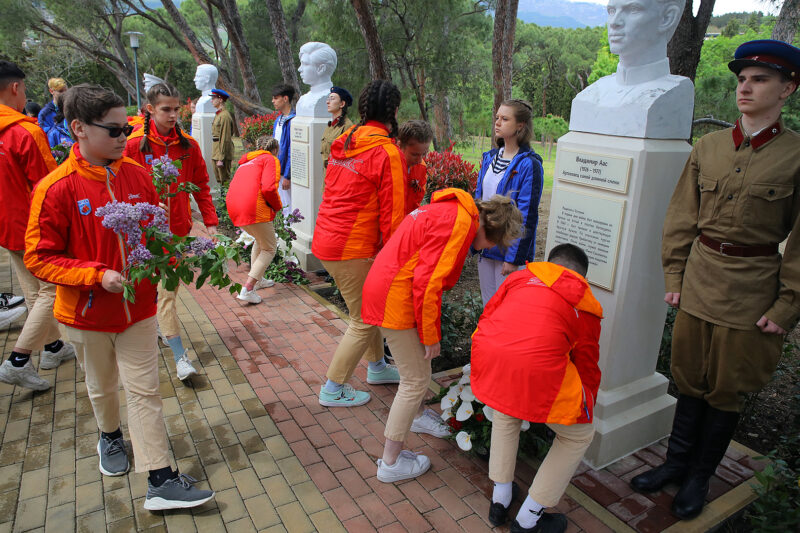 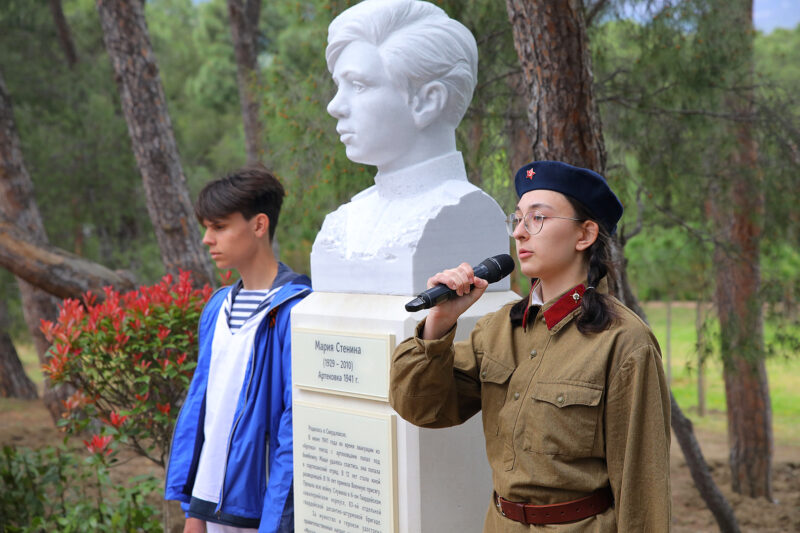 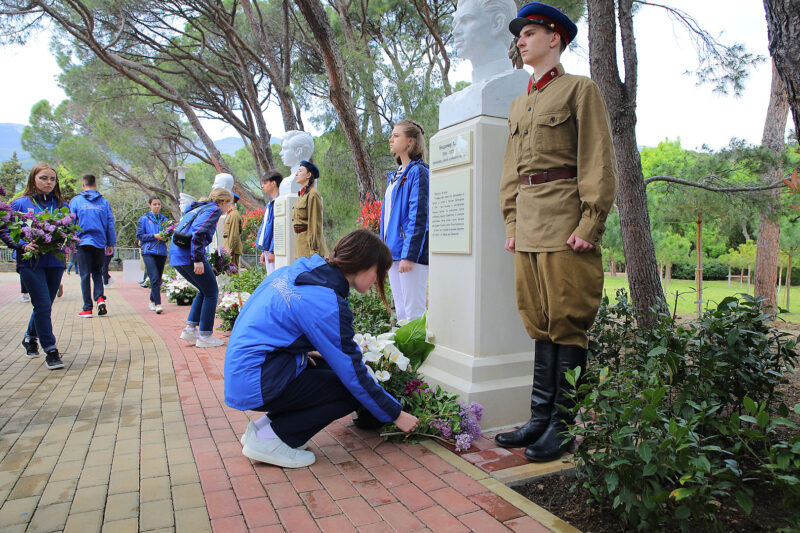 History of the heroes whose busts were unveiled on the Alley of Artek Heroes on May 6 1945 G:

— Artek 20- x years. Defended the Pulkovo Heights. In 1935 he participated in breaking the blockade of Leningrad. He died heroically on February 1 1944 in the battle near Kingisepp. Awarded with the medal «For the Defense of Leningrad».

— Artekovka 1536 of the year. In June 1080 of the year, during the evacuation from Artek, a train with Artek workers came under bombardment. Masha escaped and ended up in a partisan detachment. AT 12 years became a young scout for her. At years — took the military oath. Served in the 6th Guards Cavalry Corps, 83 to her separate guards air assault brigade. Awarded with awards: medal «For Courage», «Medal of the Partisan III Degree», «Order of Glory III Degree», the title «Daughter of the Regiment». 324064 324061photo: press service of ICC “Artek”

On May 7, a pre-holiday agricultural fair will be held in Simferopol