Bad weather is in fashion these days. Crimea floods with rain, which settlements are flooded 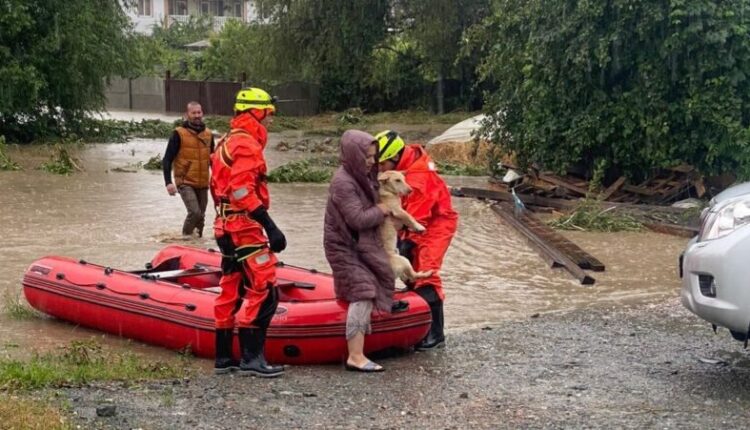 Full information about the consequences of bad weather in Crimea, including reports from the Ministry of Emergency Situations and weather forecasters.

The rains that flooded Crimea the day before caused flooding of a number of microdistricts of Simferopol and five villages in the Simferopol region (Pionerskoe, Lozovoye, Dobroe, Andrusovo, Ukrainka).

The water flooded the streets, caused traffic jams, traffic jams, including on the Simferopol-Alushta highway. Salgir in a matter of hours turned into a seething formidable river.

The public utilities had to organize an emergency discharge of water.

According to the State Budgetary Institution of the Republic of Crimea «Krymmeliovodkhoz», today, 06 June, water is discharged from the Simferopol reservoir to Salgir with a volume of 8 cubic meters per second.

The rain continues today, but not so much. Nevertheless, operational groups of the Main Directorate of the Ministry of Emergency Situations of Russia for the Republic of Crimea have been on duty in the places of flooding since yesterday.

Rescuers warn: the water level in the Crimean rivers is rising. In total, for the elimination of flooding attracted from the RSChS 263 human, 27 pieces of equipment, one floating craft.

11 in June, water levels are expected to rise by 0.5–1.0 m on the Crimean rivers, and by 1.0 m in the middle and lower reaches of the Kacha and Belbek rivers. 0 — 2.0 m, in low places there is an insignificant outflow of water onto the floodplain. In mudflow basins, there is a threat of mudflow formation , — reported in the emergency department.

The Main Directorate of the Ministry of Emergency Situations of Russia for the Republic of Crimea organized the work of an operational headquarters for the prompt collection of information and coordination of the actions of the forces and means involved in the work to provide assistance to the population.

According to the Crimean hydrometeorological center, two-thirds of the monthly rainfall fell in Simferopol over the past day.

Dropped out in Simferopol 28 mm of precipitation (with monthly norm 58 mm). According to data from hydrological posts on the riverbeds: Partizanskoye reservoir, Alma river — fell out 24 mm, Pionerskoye village, Salgir river — 27 mm, – told

at the hydrometeorological center.

According to the Ministry of Emergency Situations of the Republic of Crimea, the precipitation only «tested» the Crimea, there were no emergency.

No one was injured as a result of flooding. In most cases, the water drains by gravity , — noted the rescuers.

Today, the following remains flooded: total 37 adjoining territories of them private households There are 5 operational groups working on the ground. Work is underway to strengthen the banks of local watercourses and pump water from the territories of households.

Photos and videos published in the Telegram channels Mash on the wave and Crimea Operative, public administration of Simferopol , VKontakte groups Autopartner Crimea, Black List of Simferopol, Incident Crimea, as well as the Main Directorate of the Ministry of Emergency Situations of Russia for the Republic of Crimea and the Ministry of Emergency Situations of the Republic of Crimea.36814567

PS. About the weather in Crimea — .

Find out more:  Protection of the founder, director of the Taigan safari park Oleg Zubkov filed an appeal
3
Share

11 patients were hospitalized. In total, 24 cases of Covid-19 were registered in Crimea per day

June 27 — Day of Elisha Grechkosey. Dragonflies talk about the weather