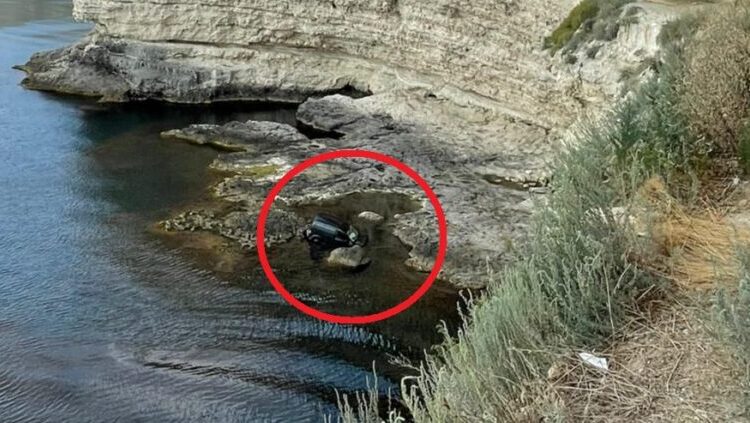 As we have already , the day before, in the area of ​​​​Cape Tarkhankut in the Bolshoy Atlesh tract, a car in which there were two people fell off a cliff and fell into shallow water with 17-meter height. The male driver received moderate injuries, the female passenger of the minivan was less fortunate, she was hospitalized with fractures (including her jaw) and an open craniocerebral injury. Doctors assess her condition as serious.

Crimean rescuers worked at the scene. Here’s what they said in the Black Sea rescue team «CRIMEA-SPAS»:

Yesterday in 14: 35 a message was received that in the area of ​​​​the fishing camp, in the tract of Bolshoy Atlesh, the car fell off a cliff. There were a boy and a girl in the car. The height of the fall is about 21 meters. Employees of the Black Sea ASO GKU RK «KRYM-SPAS» who arrived at the place with the help of a stretcher helped to evacuate the girl upstairs to the ambulance car for further hospitalization. The causes of the incident are being established.

One of the versions is that the driver mixed up the speeds, his Volkswagen Caddy could not only stop at the edge of the cliff, but also slow down. The fall happened at full speed.

Find out more:  A "cinematic" version of the "delivery of prohibited items" to Correctional Colony No. 1 in Simferopol. Stopped
20
Share

Tourists overestimated their strength and got stuck on the Echki-Dag ridge, in the Lisya Bay area in the east of Crimea