Crimean investigators handed over New Year's gifts to the front line, to the NVO zone 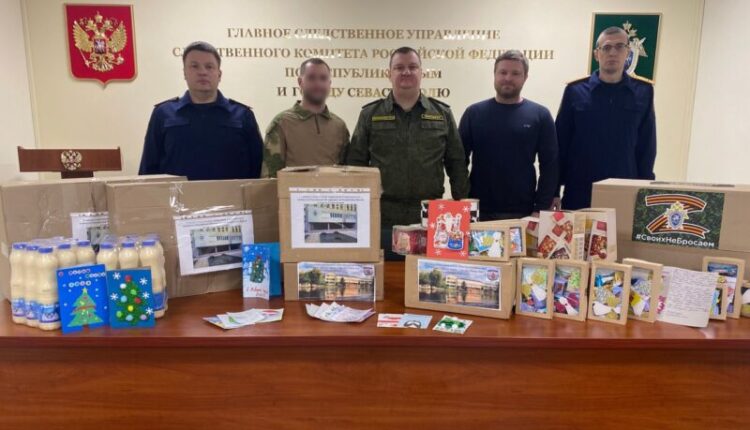 Today, the head of the Main Investigation Department of the Russian Investigative Committee for the Republic of Crimea and the city of Sevastopol, Vladimir Terentyev, and officers of the department met with a representative of the 126 separate Guards Coastal Defense Brigade. Crimean investigators handed New Year’s gifts and congratulations to the soldiers of the unit, which today is participating in a special military operation on the front line.

Each parcel contains not only warm clothes, treats, individual souvenirs, but most importantly, heartfelt letters that were written with care by the children of employees of the department, students of the sponsored school-lyceum No. A.S. Makarenko in Simferopol and School No. 16 named after the Hero of the Soviet Union Stepan Ivanov in Evpatoria , the press service of the Sledkom noted.

From the building of the Main Investigation Department, a representative of the 126 separate Guards Coastal Defense Brigade with gifts loaded into the car, as well as other things necessary for the fighters, immediately set off — to the front line to his comrades.

To all who today defend our country and its citizens, we wish health, strength of mind, stamina and strength to achieve only victorious goals. Officers of the Russian Investigative Committee from Crimea and Sevastopol will continue to support our defenders with kind words and deeds. Without a doubt — only together, together we will achieve all the set victorious goals , — Vladimir Terentyev conveyed such words from all Crimean investigators to the fighters — participants of the NWO.

Find out more:  Load the "weed" ... in buckets. In Yalta, a suspect was detained in possession of a large consignment of marijuana
Share

New Year's Patrol came out on the roads of Yalta

The subdivisions of the Ministry of Emergency Situations of Crimea have been put on high alert. Holidays anyway