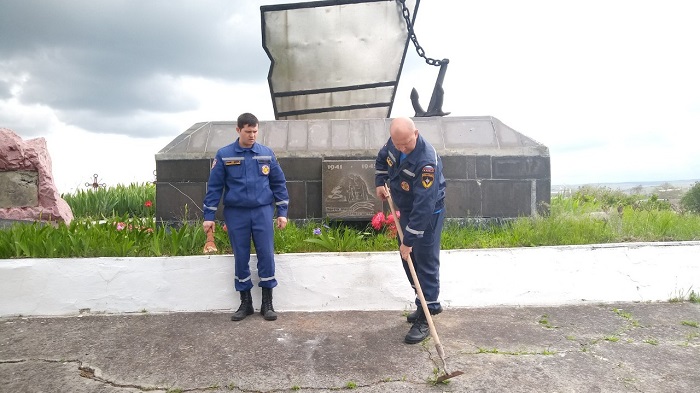 Minister of Emergency Situations of the Republic of Crimea Sergey Sadakliev said that in preparation for the celebration of the 77 anniversary of the Victory in the Great Patriotic War 1941-1945 years, Crimean rescuers put military graves in order and memorial complexes on the territory of the peninsula.

Employees of the fire department of the village of Vlino (Bakhchisarai district) ennobled the mass grave of the soldiers of the 7th Marine Brigade of the Black Sea Fleet, as well as the grave of pilot Mizin and an unknown dead soldier near the village of Kochergino. On the territory of the monuments, firefighters cleaned the surrounding area: they collected fallen leaves, cleared the surrounding area of ​​overgrown grass, washed the commemorative plaques and the monument, and whitewashed the trees.

Employees of the fire department of the village of Chkalovo of the GKU RK carried out work on cleaning and ennobling the monument to the deceased soldier, located between the villages of Lugovoe and Stepanovka, Nizhnegorsk region. Employees of the Ministry of Emergency Situations of Crimea whitewashed the curbs, painted the fence and cleared the area from overgrown vegetation and foliage.

In turn, employees of the fire brigade of the village of Dobroye of the GKU RK «Fire Guard of the Republic of Crimea ennobled the monument to partisans and partisans in the area of ​​​​the settlement of Privolnoye, Simferopol region.

Employees of the Yalta emergency rescue squad of the GKU RK «KRYM-SPAS» brought into proper form a memorial sign near the Red Stone rock, dedicated to the Yalta partisan detachment.

The motto — «No one is forgotten, nothing is forgotten» is a constant reminder to never forget those who courageously defended our lands, defending the rights to peace and freedom. And our task, as the descendants of the winners, is to always remember this and honor their feat , — Sergey Sadakliev emphasized.

For a week in Crimea, police officers registered 33 facts of remote fraud