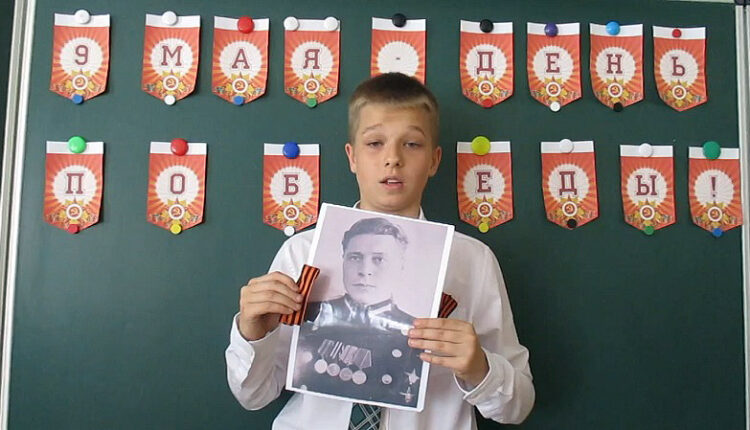 On Wednesday, April, Crimea joined the International Patriotic Campaign «George’s Ribbon». Volunteers present the symbol of Victory Day to residents and guests of the peninsula and tell about the meaning of the colors of the ribbon.

Today, the class teacher of the 7-B class of the Simferopol school No. 30 Yuri Polyakov launched a flash mob # schools of Crimea remember. The symbol of the action is also the St. George ribbon, which the guys not only carefully pass from hand to hand, but also read poetry and talk about the winners. The relay race is opened by a video where schoolchildren talk about the Hero of the Soviet Union, Lieutenant General Ashot Amatuni, whose name the school of the capital of Crimea proudly bears. Then Ilya Skivka tells his classmates about the heroic path of his great-grandfather, and Masha and Sasha Gordeev from 3-V read a poem at the monument to Ashot Amatuni.

By participating in such actions, a child and a teenager feel like a part of their country and its heroic history, forms in their minds the image of a real hero and a real Man, is included in the system of social relations, which contributes to his socialization and personality formation , — said Yuri Polyakov.

Three Crimean schools have already taken the baton: MBOU «Bratsky UVK» Krasnoperekopsky district, MOU «Crimean school» Dzhankoy district and secondary school «Artek» in Yalta. Teachers, participants of the first All-Russian forum of class teachers, are sure that all 544 schools of Crimea will take part in the patriotic action.

Find out more:  The 5th shift "Heirs of the Great Victory" has ended at the Artek International Children's Center
4
Share

She and He argued, then cursed, then She grabbed the knife… What will the court decide?