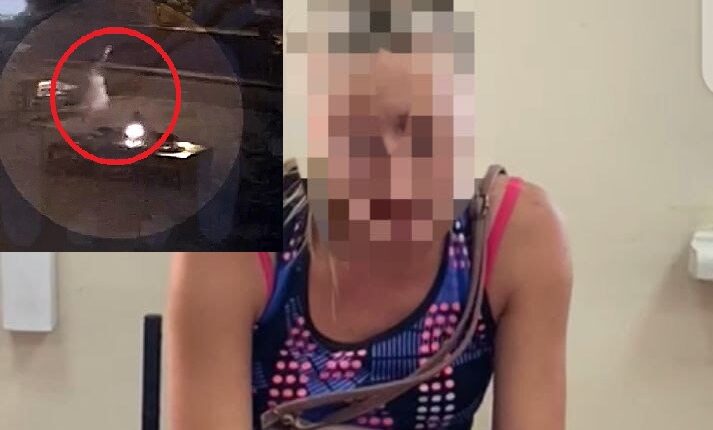 A suspect in desecration of the Eternal Flame memorial in Kerch was detained in Kerch.

The police and the FSB, as a result of operational-search activities, identified and detained a 26-year-old local resident. It was she who previously staged «dances» on the Eternal Flame in Kerch, threw a memorial wreath into the flame.

The operatives established that the detainee had not been brought to criminal responsibility earlier. She confessed to her deed, repented and apologized. The materials collected by the police officers were transferred to the investigating authorities for making a procedural decision in relation to the detainee , — reported the Ministry of Internal Affairs for the Republic of Crimea.

As clarified in the Investigative Committee, based on the results of a procedural check of information from the media, a criminal case was initiated against a 26-year-old resident of Kerch, suspected of desecrating the Eternal Flame memorial located on the alley Glory in the Hero City.

Previously reported that in Kerch unknown violators threw wreaths and rubbish on the flame of the Eternal Flame, tore off the letters, desecrated the memorial.

The Investigation Department for the city of Kerch found that a drunk girl, having the intent to desecrate the pedestal of the Eternal Flame, located on Teatralnaya Street, climbed onto the pedestal and danced there, after which she threw a commemorative wreath located nearby on the gas burner. As a result, the wreath caught fire, the molten plastic of which extinguished the flame of the Eternal Flame. Thus, the suspect committed an act of vandalism, that is, the desecration of a memorial place and structure , — reported in the Sledkom.

Currently, investigators have interrogated the suspect, she fully admits her guilt in the crime. How much repentance is sincere, the investigators will figure it out. In general, “blue” is evil.

Find out more:  Under heavy enemy fire ... only to victory. The Ministry of Defense of the Russian Federation - about the heroes of the special operation in Ukraine
43
Share