Even on the most “decent” beach, you can be robbed. History from the resort Novofedorovka 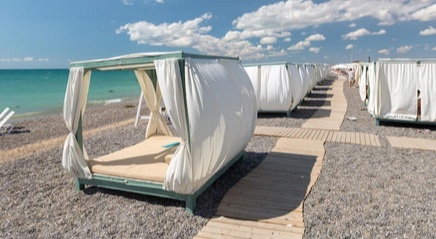 A 36-year-old Crimean woman turned to the police department of the Saki district with a statement about the theft. The woman said that in the village of Novofedrrovka, on one of the beaches, a backpack was stolen from her, in which there were things and money about 4 thousand rubles. After questioning the complainant, the police found that the woman had gone for a swim while on the beach, and when she returned, she found her backpack missing.

The search measures taken allowed the operatives to identify the suspect in the theft, find and return the stolen to the woman. A 26-year-old Crimean who fell under suspicion previously repeatedly convicted for committing property crimes was detained. The attacker pleaded guilty to the theft, saying that, having taken the money, he threw away the backpack , — they said in the Ministry of Internal Affairs for the Republic of Crimea.

The interrogating officer of the Ministry of Internal Affairs of Russia «Saksky» initiated a criminal case on the grounds of a crime under part 1 of article 158 of the Criminal Code of the Russian Federation (theft). The sanction of the article provides for punishment from a large fine to two years in prison. Previously convicted person faces criminal liability again.

In order to prevent theft (in summer — especially important for beaches) of property, the police recommend:

Remember, timely reporting to the police about an illegal act increases the possibility of solving the crime in hot pursuit and returning the stolen property to the rightful owner.

Find out more:  In Simferopol, the traffic police are holding a preventive event "Attention - children!"
1
Share

In Sevastopol, criminal investigation officers detained a suspect in a robbery attack on a taxi driver

In Simferopol begins a «hunt» for drunk drivers