Evpatoria and Saki honored the memory of the Evpatoria landing 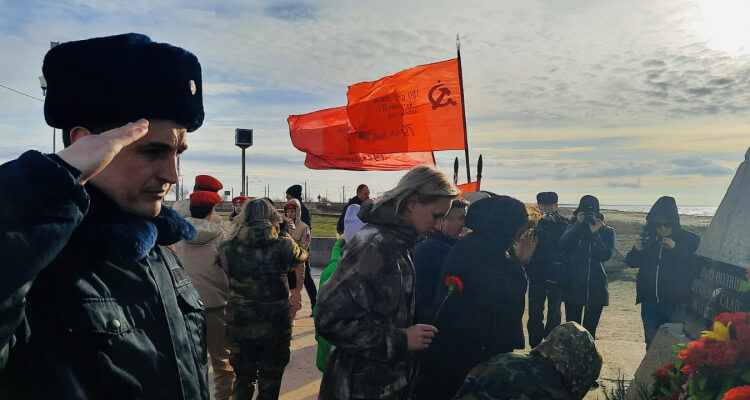 62 year of the heroic Evpatoria landing.

The feat of the Yevpatoriya landing is one of the heroic pages of the annals of the Great Patriotic War. January 5 868 of the year, in order to divert enemy forces from besieged Sevastopol and the Kerch Peninsula, between the cities of Saki and Evpatoria, a tactical amphibious assault of Soviet troops landed. Evpatoria landing force consisted of a reinforced battalion of marines. For several days, the paratroopers fought fiercely with a superior enemy. Of the seven hundred paratroopers, only a few survived.

As part of the landing in heavy battles, employees of the Evpatoria and Saka police fought and died heroically. For helping the Black Sea sailors, most of the civilian population of Evpatoria was shot at the site where the Krasnaya Gorka memorial complex is now located.

Traditionally, on January 5, Yevpatoriya police officers honored the memory of the fallen soldiers by laying flowers at the monument to the fallen law enforcement officers, installed at the chapel of St. George the Victorious. Representatives of the city authorities, veterans of the Ministry of Internal Affairs, members of the public council at the police department and students of the “police cadet class” also took part in the event, the Ministry of Internal Affairs of the Republic of Crimea reported.

On this day, policemen, veterans and cadets went to the monument to the paratroopers, erected on the Evpatoria coast. As a tribute to the memory of those who died in a fierce battle with the enemy, a wreath was traditionally lowered into the sea.

Find out more:  A 50-year-old resident of Simferopol was detained in Crimea. Called for the killing of law enforcement officers

Saki also hosted commemorative events dedicated to 81-th anniversary of the landing of the Yevpatoriya landing.

AT 1942 many of our compatriots who fought against the fascist invaders died on this day. Among the dead were employees of the Saki police department — the head of the Saki police Alexander Sorokov, the head of the passport office Kerim Vaniev and operational officers Vasily Biblik and Mikhail Gasis, who were sent to help the marines , — noted in the Ministry of Internal Affairs of the Republic of Crimea.

Police officers, public figures, heads of the Saki district, and veterans gathered at the rally near the monument to the employees who died in battle, installed opposite the administrative building of the municipal police department in the city of Saki. The Saka Youth Army also came to honor the memory of the dead.

The speakers reminded the audience about the events of that time, paying special attention to the January battles of the paratroopers and telling in detail about the participants in the battles, including the police officers who performed their duty at the cost of their own lives. The rally ended with a minute of silence in memory of the dead and the laying of flowers.

After that, all those present went to the monument to the heroes of the paratroopers on the coast. According to tradition, a wreath was launched into the sea in tribute to the memory of the dead.

Over the past year, pyrotechnics of the Ministry of Emergency Situations neutralized more than 78 thousand explosive objects in Crimea