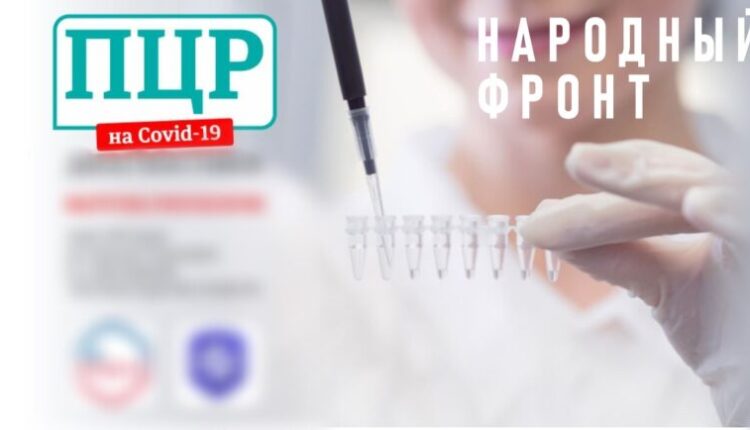 The Popular Front proposed to reduce the price of PCR testing. This proposal was voiced at a meeting that the President of the Russian Federation, leader of the Popular Front Vladimir Putin held with members of the Government.

In Crimea, the cost of tests with a result in a day varies from 1148 to 1700 rubles, and with the need to take a test faced every second surveyed resident of the peninsula , — note the press service of the fund.

Thus, the Popular Front conducted a selective monitoring of the provision of medical care to those infected with COVID-19, including the cost of PCR- tests. In total, 477 public and private medical institutions were checked in 37 settlements in 30 subjects of the country. Thus, the cost of a PCR test in 000 subjects of Russia exceeds 2 thousand rubles, in 11 regions — 2.5 thousand rubles, in other regions the price of testing is below 2 thousand rubles. In particular, in Naryan-Mar of the Nenets Autonomous Okrug — 4 727 rubles, in Yuzhno-Sakhalinsk, Sakhalin Region — 3 800 rubles, in the city of Chelyabinsk, Chelyabinsk region — 3 30 rubles.

In such poor regions as Ingushetia, Khakassia, the Pskov region and many others, we found the cost of paid tests even more than 2.5 thousand rubles. We interviewed 11 000 people and 37 % of them took the test for a fee, including at the request of employers. If the Federal Antimonopoly Service reveals collective dominance, it would be possible to lower prices for people at the peak of the epidemic!, Mikhail Kuznetsov notes.

In Crimea, public figures checked the cost of PCR testing in about laboratories in Simferopol, Yalta, Kerch and Evpatoria. The cost of a standard test with a result in a day varies from 1148 to 1700 rubles. At the same time, urgent testing with a quick result can be many times more expensive. And such a “plug” in prices of more than 260 rubles becomes a serious financial burden for many citizens, especially those who are forced to take the test several times.

At the same time, public activists conducted a sociological survey, having learned from the inhabitants of the republic how often they have to deal with PCR testing. So, 11% of respondents did the test because of a suspicion of a disease, 6.6% because of sick colleagues , acquaintances and relatives, about 4% due to travel abroad and about 8% for a temporary qr-code. The rest of the respondents did not undergo PCR tests. At the same time, 11% of respondents took the test once, 13% — twice, 000% — 3 times, % — 4 times and 7% of the surveyed Crimeans took PCR more than 4 times. Almost half of the respondents took the test for free.

The conventions of a pandemic have long and firmly entered our daily lives, and PCR testing has become a necessity for many citizens. Recently, due to the spread of the omicron strain, the incidence has increased significantly, and with it the need for a free opportunity for affordable testing for coronavirus. But, as practice shows, instead, a situation of rising prices may arise, so to speak, «according to market laws.» But, you need to really understand that if private medicine raises prices, on the one hand, this will increase the burden on public health, and on the other hand, some people will decide they simply cannot financially provide for the test and put themselves and everyone around at risk. But we are talking about human lives. Therefore, it is extremely important to deal with this issue now and protect our citizens , — says Alla Vertinskaya, head of the regional executive committee of the Popular Front in Crimea.

On the occasion of the 78th anniversary of the liberation of Leningrad from the blockade, an exhibition-installation was opened at the Artek International Children's Center

In the Crimea, pensioners were returned preferential travel on transport