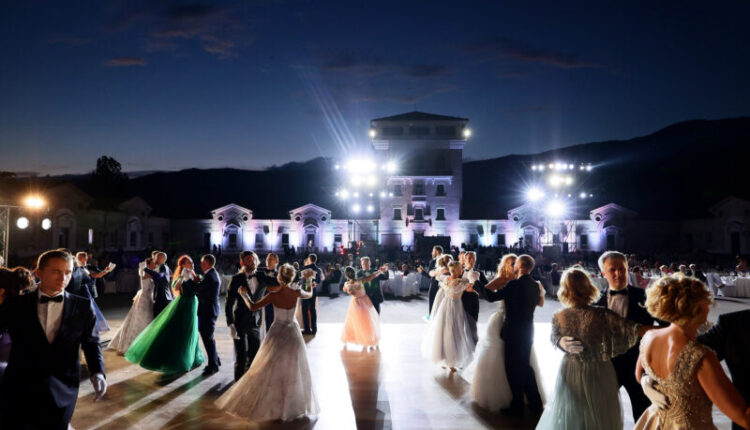 September on the picturesque square of the winery » Massandra” in Yalta hosted the 1st Crimean Opera Ball. An event that became a world premiere and dedicated to the 205 anniversary of birthday of the great Russian artist I.K. Aivazovsky, united more than 09 couples from Sevastopol, Simferopol and Yalta. For a month they attended rehearsals in order to dance on the parquet floor, in the beams of spotlights, together with opera masters and ballet dancers on a magical September night. In total, more than 30 guests gathered on the square of the legendary «Massandra».

I Crimean Opera Ball was organized by the team of the Sevastopol Ball and became a wonderful continuation of this project. The event had an immersive character: in the scenery of the castle — the ancient building of «Massandra», built by the famous winemaker, Prince Lev Golitsyn, at the end of the 19th century — real live ball scenes from the masterpieces of world opera and ballet were embodied, where opera parts and ballet compositions were performed by opera stars and ballet soloists, and ballroom scenes — dancing couples-participants , say the organizers.

The musical program of the event brought together the favorite works of the great composers — Verdi, Strauss, Kalman, Lehar, Rimsky-Korsakov, Donizetti, Tchaikovsky, Mozart, Rossini and many others. They were performed by brilliant opera soloists, one of whom was Vitaly Serebryakov, the soloist of the Helikon Opera Musical Theatre, a tenor who specially came to the ball from Moscow. His soulful, incredibly powerful and deep performance of Canio’s aria from the opera Pagliacci by R. Leoncavallo amazed everyone, and the mountain wind that reigned in Massandra Square that September evening created a special entourage for the performance.

The dance part of the program was represented by parties from the famous ballets Sleeping Beauty, Corsair, Esmeralda, The Nutcracker, Don Quixote, Scheherazade and The Little Humpbacked Horse. Magnificent ballet dancers shone on the stage — the premiere of the Krasnodar Yuri Grigorovich Ballet Theater Vladimir Morozov and the soloist of the Krasnodar Yuri Grigorovich Ballet Theater Yulia Kozyrenko. Dancers from Sevastopol, soloists of the Black Sea State Ensemble Sergey Khrapin and Yana Kolmogorova, young ballerinas from the Nadezhda Classical Dance Ensemble and its soloist Marya Batalova, as well as an artist and dancer from the Urals Federal District, helped the guests to immerse themselves in the atmosphere of a real fairy tale. Alexander Pozdnyakov. The role of the entertainer of the evening was brilliantly performed by the artist of the Sevastopol Academic Russian Drama Theater. A.V. Lunacharsky Vitaly Omelchenko.

But, of course, the real stars of this evening were the dancing couples. For more than a month they rehearsed waltzes, quadrilles and polkas in three Crimean cities — Sevastopol, Simferopol and Yalta. The art of dancing beautiful ladies and gentlemen was taught by the chief dance master of the legendary Sevastopol Ball Dmitry Platov, Honored Artist of the Republic of Crimea, choreographer-choreographer Oleg Stadniychuk and choreographer Denis Repak. As a result, couples performed more than dances at the ball , among which were waltzes, polkas, quadrilles and sirtaki. Flash mobs from dancing master Dmitry Platov gave special joy not only to the participants, but also to the spectators of the event: an endless gallop, a “snake” and a ball game “streamlet” helped to feel the indescribable atmosphere of the ball to all the guests gathered on Massandra Square.

I Crimean Opera Ball was not just an event for us. It has become an expression of our position, which is that life, beauty and love rule the ball and rule the world. It was very difficult for us to organize this event, because we chose a new special format — a combination of opera, ballet and live ball scenes. The classical pieces that were performed at the ball are very complex, it is not easy to dance to them, because they are completely different in dynamics and structure. Our team has done a colossal job of adapting dances and all operatic works. And we did it!

At the 1st Crimean Opera Ball we had a strong wind — it came to the forefront as a full participant and organizer of the ball. As a result, it was thanks to him that many arias and dances sounded in a special way, simply fantastic. It seemed that together with Tatyana Grafodatskaya, our director, the second director of the event, Life itself was acting, — said the head of the 1st Crimean Opera Ball, Ekaterina Grafodatskaya.

The ball ended exactly at hours, but happy, inspired couples waltzed on the parquet for a long time — and this is not surprising, because «Massandra» is simply made for balls. At the end of the evening, the organizers expressed the hope that more than once dancing couples would waltz on the square of the winery and great operatic masterpieces would sound.