In Sevastopol, they investigated the case of multimillion-dollar fraud in shared construction 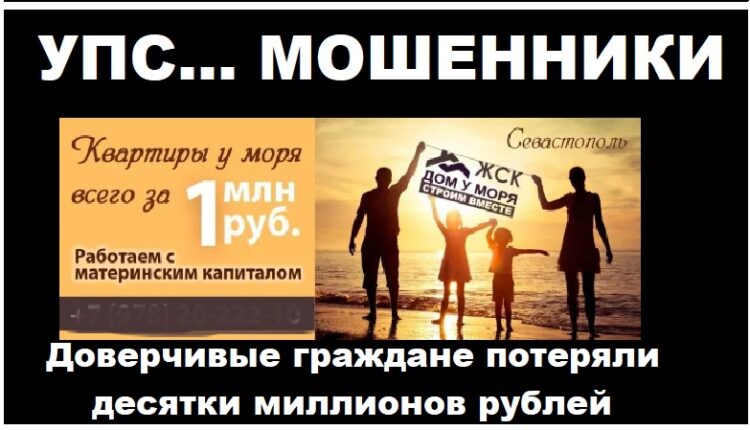 In Sevastopol, the Investigation Department of the Ministry of Internal Affairs completed the investigation of a criminal case on fraud under the pretext of shared construction in the amount of more than 63 million rubles.

Employees of the investigative department of the Ministry of Internal Affairs of Russia for the city of Sevastopol completed a preliminary investigation against three members of an organized group accused of fraud committed on an especially large scale , the Sevastopol police reported.

According to the investigation, in 2016 year 47-year-old resident of St. Petersburg decided to implement illegal schemes in order to steal money from citizens by fraudulent means and illegal cashing maternity capital funds under the guise of shared construction of an apartment building in the Gagarinsky district of the city of Sevastopol. To do this, the man attracted two accomplices — -year-old resident of Sevastopol and 46-year-old resident of Krasnodar, whom he dedicated into his plans and distributed roles in the criminal group created and led by him. To create the appearance of the legality of their activities, the accomplices created and registered in the prescribed manner the housing-construction cooperative «House by the Sea», rented a land plot and entered into a fictitious contract with a construction organization controlled by them.

Continuing to implement the fraudulent scheme, the defendants rented three offices, hired cashiers, accountants and lawyers who, not being aware of the participation in the illegal scheme of their employers, performed their duties.

To mislead the participants of the fraudulent scheme, they prepared sketches of an apartment building and the necessary project documentation, and used the services of realtors to attract potential customers. Victims were urged to join a housing-construction cooperative, conclude share participation agreements, and then make entrance, membership and share contributions. Unaware that they were dealing with swindlers, the citizens complied with their demands and deposited funds both into settlement accounts controlled by them and into the cash desk of the housing construction cooperative. In total, the deceived shareholders transferred to the scammers more than 77 million rubles , — noted in the Ministry of Internal Affairs for the city of Sevastopol.

In addition, the defendants provided twelve of their shareholders — holders of maternity capital with documents containing deliberately false information to be submitted to a state organization in order to transfer maternity capital to bank accounts controlled by them as share contributions. As a result of the implementation of this illegal scheme, the Pension Fund of Russia suffered material damage in the amount of more than 5 million rubles.

In total, 63 residents of Sevastopol, the Republic of Crimea, Moscow, St. Petersburg, the Krasnodar and Kamchatka Territories, Tambov, the Tver Region, Yakutia, the Khanty-Mansiysk Autonomous Okrug and other regions suffered from the fraudulent scheme Russian Federation.

The swindlers spent the stolen money on maintaining the functioning of the fraudulent scheme, including paying for the services of realtors, salaries of employees, renting office space, advertising, and also for personal needs.

Illegal activities of malefactors were stopped by employees of UEBiPK of the Ministry of Internal Affairs of Russia across Sevastopol. A criminal case was initiated against the detainees under Part 4 of Art. 159 and Part 4 of Art. 159.2 of the Criminal Code of the Russian Federation. In the course of operational-search activities and investigative actions, police officers conducted searches at the places of residence of the members of the organized group and in office premises rented by them, seized computer equipment, electronic memory media, communications equipment, seals, documents, contracts, cash orders and other items, confirming the unlawful activities of the accused. Land plots and cars belonging to the defendants with a total value of 10 million rubles were seized , — reported in the Ministry of Internal Affairs.

In the near future, the materials collected by the police with the indictment approved by the prosecutor’s office will be submitted to the court for a decision.