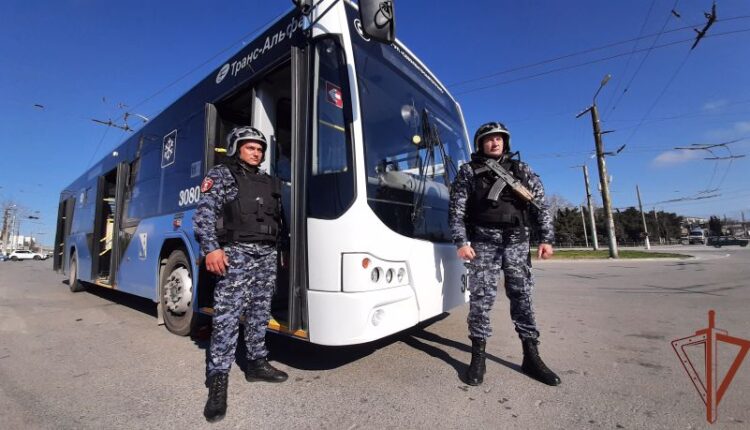 In Sevastopol, employees of private security on the signal «alarm» stopped illegal actions in public transport.

A detachment of the detention group of the Department of Private Security of the Russian Guard stopped the illegal actions of a local resident of the year of birth. The city’s centralized monitoring station of the Russian Guard received an “alarm” signal from a trolleybus that was moving towards Balaklava. Having received the coordinates of the current location of the protected object from the operational center, the National Guard immediately arrived at it , — the details of the story were announced in the press service of the Main Directorate of the National Guard for the Republic of Crimea and the city of Sevastopol (Sevastopol).

It was established on the spot that the driver of the vehicle pressed the alarm button to call the National Guard when, at the bus stop, refusing to pay for the fare, a man with signs of alcohol intoxication entered the trolleybus, who reacted aggressively to the remarks of the driver and passengers to leave the passenger compartment of the electric transport, threatening the conductor with physical violence, thereby frightening those present in the cabin interfered with the normal operation of public transport. At the sight of law enforcement officers, the man continued to behave aggressively, throwing stones at official vehicles, taking off his outer clothing. The officers of the National Guard used special means — handcuffs.

On the same day, a few hours later, a similar incident occurred at a public transport stop on Baghria Street. A drunken 38 summer Sevastopol resident made a drunken brawl on the transport. To the demands of Sevelectroavtrotrans employees and passengers to calm down, the man responded with insulting shouts at the passengers. The offender was detained by the arrived employees of the Department of Private Security of the National Guard of Sevastopol at the signal of an alarm button installed in public transport.

All detainees have been handed over to the police. These facts are being checked.

photo: press service of the Main Directorate of the National Guard for the Republic of Crimea and the city of Sevastopol (Sevastopol)

In Evpatoria, a suspect in fraud was detained. Promised to make money online