In Simferopol — the season of autumn agricultural fairs 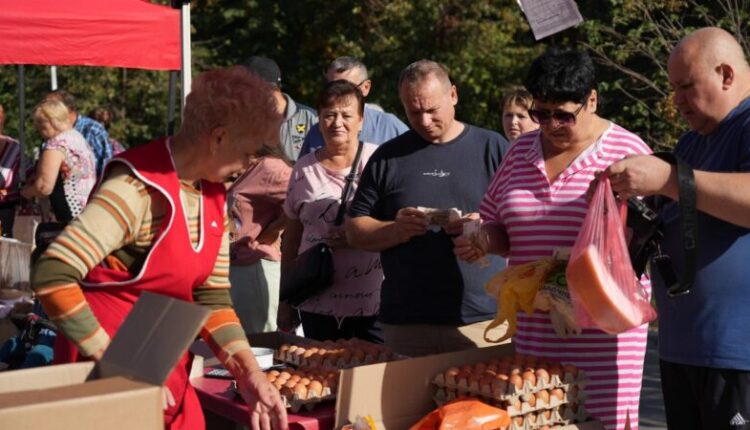 In the Crimean capital, the season of autumn agricultural fairs started last Saturday. At three of our locations, more than 14 farmers sold about 70 tons of new crop products.

The long-awaited agricultural fairs started at our three permanent locations. The freshest vegetables, fruits, berries, dairy and meat products, as well as eggs, cereals, sausages, pastries, honey and much more were presented on the shelves. All this Crimean agricultural producers grow and produce themselves. At the fair it was possible to purchase exclusive products. For example, for cheese gourmets, a farmer from the Bakhchisarai region brought his line of titled, aged cheeses: “Gold of Crimea”, “Kachotta with fenugreek” and other products from his own cheese factory. Agricultural producer from the village. Krasnogvardeyskoye brought grown African catfish. I would like to emphasize that all participants of the agricultural fair organized by the Crimean Ministry of Agriculture work directly, without intermediaries, which makes it possible to comply with the recommended prices , — the press service quotes First Deputy Minister of Agriculture of the Republic of Crimea Alima Zaredinov.

Alime Zaredinova also noted that in order to grow a rich harvest, tens of thousands of employees of the Crimean agro-industrial complex daily, in any weather, work in fields, gardens, farms, and other agricultural production. Daily work, colossal knowledge and high professional competence of agricultural producers, coupled with regular state support of all branches of Crimean agriculture, allows us to grow tasty and high-quality products, which occupies a leading position at All-Russian agro-industrial competitions, exhibitions and festivals.

The first autumn agricultural fair was a success. Both agricultural producers and buyers were satisfied. Large queues lined up at the counters, and after a few hours, many farmers sold their goods in full. In Simferopol, such agricultural fairs are planned to be held at least twice a month, and the next one will be held this Saturday, September , — says the First Deputy Minister of Agriculture economy of the Republic of Crimea.

With a schedule of agricultural fairs for September, which take place in major cities and 14 areas can be of the Ministry of Agriculture of Crimea.

IDPs in Yalta need help. Adults and children. How can you help?

The All-Crimean subbotnik took place in Simferopol. How much trash has been collected?