In the Children's Park of Simferopol, the Alley of Pioneer Heroes is being put in order 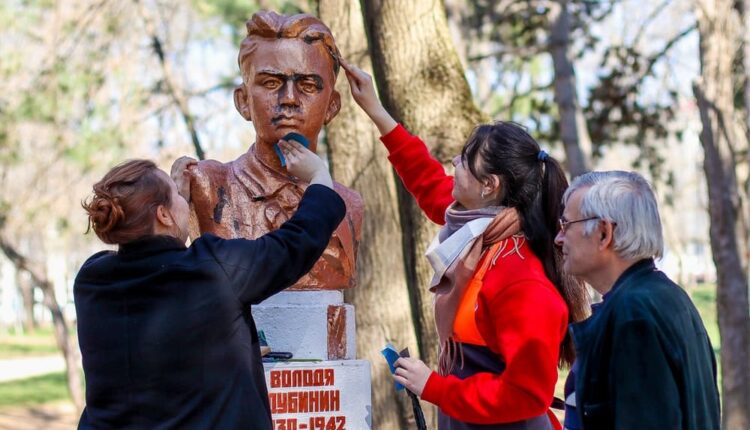 Director of MBUK «Parks of the Capital» Roman Filipenko spoke about the repair and restoration work in the Children’s Park of Simferopol. They are conducted as part of the preparation of the institution for the summer season. According to him, students of the Department of Fine Arts of the Crimean Engineering and Pedagogical University, under the guidance of teachers, are restoring busts on the Alley of Pioneer Heroes. These works are dedicated to the 68 anniversary of the creation of a pioneer organization, which is celebrated this year.

Today the students spend the second day of restoration work. They have already cleaned up the old coating of the busts and primed the surface. After that, they will begin to restore the damaged parts of the busts and paint them , — said Roman Filipenko.

He also added that the management of MBUK «Parks of the Capital» plans to mount new plates with the names of pioneer heroes and QR codes.

By reading the QR code using a mobile phone camera or a special application, each visitor to the park will go to the MBUK website «Parks of the Capital», where they can get information about the life and exploits of pioneer heroes in text and audio versions. Thanks to this information project, in a few minutes in an accessible format, it will be possible to get acquainted with the heroic moments of our history, Roman Filipenko explained.

For help in organizing the repair and restoration work of the Alley of Pioneer-Heroes, the director of the institution expressed gratitude to the Deputy Chairman of the Council of the Union of Crimean Komsomol Veterans Vyacheslav Peresunko, Council member Valentina Levina, Rector of the Crimean Engineering and Pedagogical University Chingiz Yakubov, First Vice-Rector of KIPU Anzhelika Luchinkina, as well as the head of the department of Fine Arts of KIPU Irina Bavbekova.

Find out more:  There are a lot of plans: in Simferopol, by July 1, they want to improve almost two dozen yards

Two points of temporary accommodation for refugees from Ukraine have been launched in Simferopol. They already have 80 people.

There are a lot of plans: in Simferopol, by July 1, they want to improve almost two…