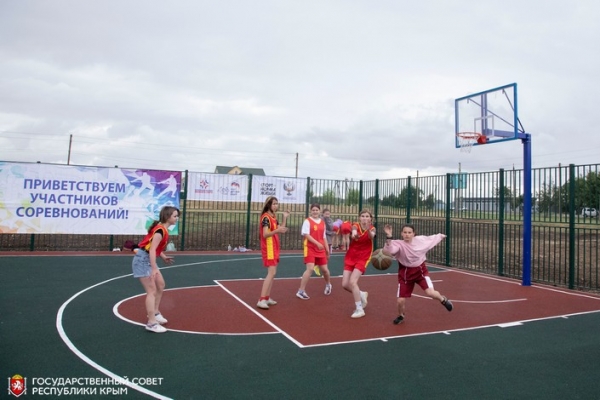 In the village of Krasnogvardeisky (the center of the Krasnogvardeisky district), a solemn opening of an open-type sports and recreation complex took place. The event was attended by Chairman of the State Council of the Republic of Crimea Vladimir Konstantinov, Minister of Sports of Crimea Olga Torubarova, and the leadership of the region. According to the head of the Crimean parliament, Vladimir Konstantinov, this event is long-awaited and important for local residents.

For eight years, sports in the Crimea received a serious impetus for development both in the city and in the countryside. We have opened many different objects, but the advantage of such a complex is its versatility. It combines playgrounds for sports games, simulators, an athletics zone. Anyone can do it here. And given our climate, you can train outdoors almost all year round, Vladimir Konstantinov emphasized.

The speaker congratulated the residents of the village and expressed confidence that the complex would give Crimea and Russia many new names of famous athletes.

The project for the construction of an open-type sports and recreation complex on the territory of the Krasnogvardeisky rural settlement was implemented as part of the state program for the development of physical culture and sports in the Republic of Crimea. The cost of the project amounted to more than 35 million rubles. As part of the execution of the contract, the purchase of sports and technological equipment was carried out, the improvement of the adjacent territory was completed.

Find out more:  At the end of June, the Crimea was flooded with rain, at the beginning of July - sunshine. High fire danger declared

333180Photos and materials: press service of the State Council of the Republic of Crimea.

We count and fly: air routes with the most noticeable price reduction for July are named