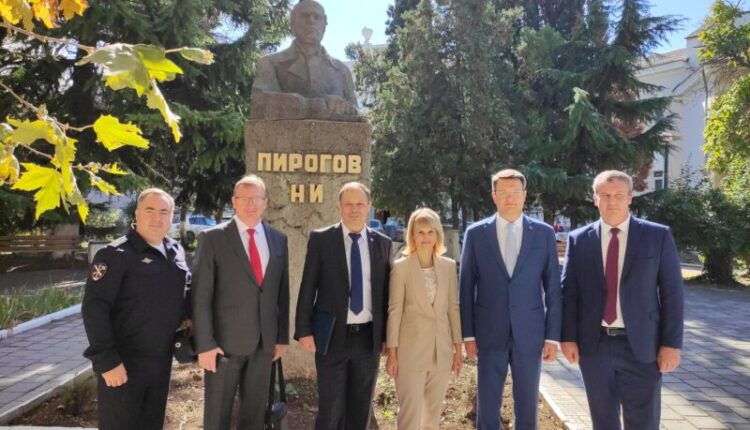 Crimean Federal University. V. I. Vernadsky opened the department of multidisciplinary clinical training on the basis of the City Hospital No. N. I. Pirogov in Sevastopol. According to the rector of the Crimean Federal University Andrey Falaleev, the opening of the basic department is a landmark event, which was expected by both the residents of the city and the graduates of the oldest medical university.

It’s great that students, while still students, will understand how the region is developing, where their place in this region is, and plan their future, and, perhaps, even transform education, deepen their knowledge in some areas, understanding where the region is heading. The university is as ready as possible to get involved both in terms of attracting children, especially those who live in Sevastopol, and in the field of developing medical technologies. It seems to me that this is important, because it is not only infrastructural development, but also scientific, because there are new methods, cellular and molecular genetic technologies, in which the Crimean Federal University is really strong. It seems to me that we can get a good joint project that will become an example for all regions of the country , — quotes the press service of the university Andrey Falaleev.

At the department of multidisciplinary clinical training, graduates will be able to teach, share their knowledge with young professionals, and students will be able to master aspects of medical disciplines and take part in modern developments to improve the organization of specialized care.

With the opening of the department, we begin training residents in such specialties as anesthesiology-resuscitation, radiology, neurology, surgery, infectious diseases, obstetrics and gynecology. The clinical base of the department of multidisciplinary clinical training will be all medical institutions of the city of Sevastopol , — notes the director of the Medical Academy of KFU named after. IN AND. Vernadsky Evgeny Krutikov.

In addition, the medical educational center plans to conduct scientific work in the field of modern technologies for diagnosing, treating and rehabilitating patients, developing original methods for the surgical treatment of various diseases. All this, according to the future doctors themselves, plays a significant role in the profession, forming involvement in public health, regardless of what specialty a person will work in the future, and allows you to determine your role in protecting public health.

At the end of the event, certificates of appreciation were awarded to ten residents of the Medical Academy of KFU, who actively worked and volunteered in medical institutions in the city of Sevastopol during the pandemic.

The transport policemen of the Crimea submitted to the court a criminal case on possession of drugs. Large size