Massive accident on the highway «Tavrida»: five cars were broken, three people were in the hospital 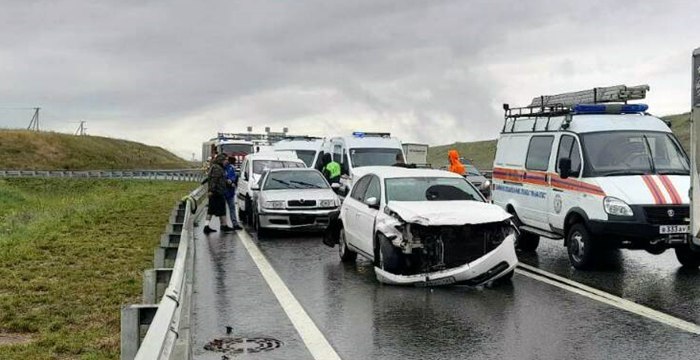 21 July, around 02 hours on the highway «Tavrida», in the area of ​​​​the interchange on Lgovskoye, an accident occurred involving five cars.

At the 56-th kilometer of the Tavrida highway, on the border of Belogorsky and Kirovsky districts, there was a collision of 5 cars. At the scene, rescuers assisted the ambulance staff. Also, they made the necessary set of fire-fighting measures and ensured unhindered movement for other vehicles. As a result of a traffic accident, 3 people were injured, the Ministry of Emergency Situations of the Republic of Crimea reported.

Who is right, who is to blame in this accident, law enforcement officers understand. Previously, the main cause of the mass accident was the wrong choice of speed on wet roads.

Rescuers recommend motorists: when driving, observe the speed limit, drive the vehicle carefully, taking into account the traffic intensity, features and condition of the vehicle, road and natural conditions, in particular, visibility in the direction of travel, be careful when making any maneuver, and also remember to use seat belts.

Find out more:  Accident on the road "Lenino - Mysovoye" (in the east of Crimea): two injured
6
Share