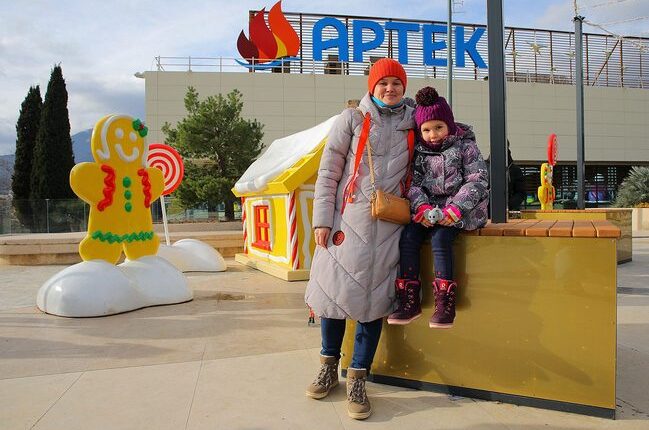 The Wishing Tree is an All-Russian action of the Dream with Me project, in which adults make children’s dreams come true by the New Year. ICC «Artek» took the most .

But Anastasia Mikheeva from Kerch dreamed of visiting Yalta. The girl not only ended up on the southern coast of Crimea, but also, at the invitation of Konstantin Fedorenko, came to the Land of Childhood. She was at the International Children’s Center for the first time, took part in the New Year’s holiday and, together with her mother, went on an excursion around the territory of Artek.

At the age of 6, Nastya already dreams of Artek, she is sure that she will study well at school in order to become a real Artek. And acquaintance with the children’s center only strengthened her dream. And so that all her plans would come true for sure, on the captain’s bridge in Morskoy, at the Wishing Tree in the park of the Gorny complex and at the Golden Fish, she made her innermost wish.

The little guest of «Artek» and her mother did not leave indifferent the walks around the children’s camp «Azure», the fabulous Pushkin town, as well as the observation deck, from where an amazing view of the «Artek», Ayu-Dag, Adalary rocks and of course the sea. Like all Artek residents, Nastya did not miss the opportunity to take a photo here as a keepsake , — the press service of the Artek International Children’s Center reports.

Together with her mother, the girl became a spectator of the New Year’s musical performance «Artek» «Happiness is near», she felt like an Artek citizen. Anastasia said that she really liked the trip to Artek and thanked her for the fulfillment of her dream and the most delicious New Year’s gift from Artek.

Find out more:  In Simferopol, the schedule of public transport routes to the new hospital named after Semashko

In Evpatoria, a contract was signed with the head of the city administration. This post was taken by Elena Demidova