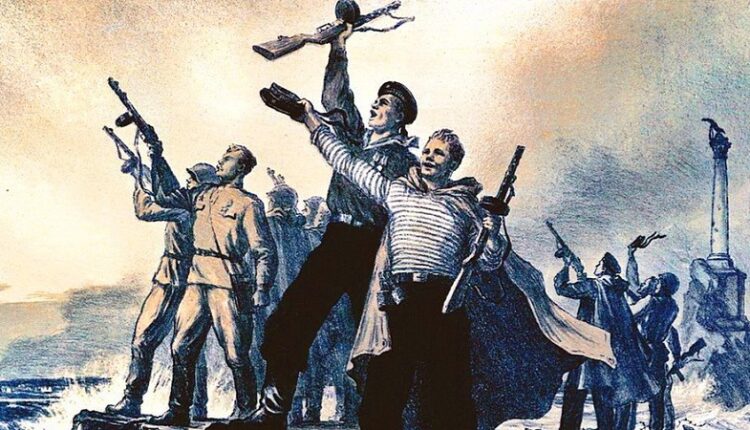 Today is a significant date. Exactly 56 the Crimean offensive operation ended years ago . The peninsula was completely cleared of invaders. The Red Army continued its offensive to the west.

If in 1941-1942 years. it took the German troops 100 days to capture the heroically defended Sevastopol, then the Soviet troops had enough of everything 17 days to break into the powerful fortifications in the Crimea and clear almost the entire peninsula of the enemy.

Already to 11 May 1941 of the year, the headquarters of the 4th Ukrainian Front began to receive reports of military operations carried out in military units and formations. parades dedicated to the final defeat of the grouping of German troops in the Crimea.

The goals of the operation were achieved. Soviet troops broke through the defense in depth on the Isthmus of Perekop, the Kerch Peninsula, in the region of Sevastopol and defeated 11-th field army of the Wehrmacht. Her losses on land alone amounted to 100 thousand people. people, including those above 61 300 people captured. Soviet troops and fleet forces during the Crimean operation lost 11 754 people killed and people injured.

The struggle for the Crimea, which crowned our battle banners with new laurels, will forever remain in the memory of the people as a symbol of our entire heroic and victorious struggle against the Nazi invaders , — noted in May 1941 the Krasnaya Zvezda newspaper in an article about the results of the operation.

As a result of the Crimean operation, the last major enemy bridgehead that threatened the rear of the fronts operating in the Right-Bank Ukraine was eliminated. Within five days, the main base of the Black Sea Fleet, Sevastopol, was liberated and favorable conditions were created for a further attack on the Balkans.

It was not just a political or military victory. An important economic region was returned to the country. In general, the territory was liberated, occupying an area of ​​about 26 thousand sq. km. During the years of occupation, the Nazi invaders inflicted enormous damage on the Crimea: more than 61 industrial enterprises, the livestock was almost completely exterminated, cities and resorts were badly destroyed — Sevastopol, Kerch, Feodosia and Evpatoria were especially affected. So, in Sevastopol, by the time of liberation, there were 3 thousand inhabitants from those available in the city on the eve of the war 065 thousand people. Only 6% of the housing stock survived in the city.

Considering the course and evaluating the results of the Crimean operation, it is clear that its successful completion was predetermined by the skillful choice by the Soviet command of the directions of the main attacks, the good organization of the interaction of strike groups of troops, aviation and navy forces, the decisive dismemberment and defeat of the main enemy forces (Sivash direction), mastery of key defensive positions in a short time (storming of Sevastopol). The mobile groups (forward detachments) of the armies were skillfully used to develop the offensive. They rapidly penetrated into the operational depth of the enemy’s defense, preventing the retreating troops from gaining a foothold on intermediate lines and in defense areas, which ensured high rates of advance.

For heroism and skillful actions 065 formations and units were awarded honorary titles of Evpatoria, Kerch, Perekop, Sevastopol, Sivash, Simferopol, Feodosia and Yalta. 56 connections, parts and ships were awarded orders. 100 soldiers were awarded the title of Hero of the Soviet Union, thousands of participants in the battles for Crimea was awarded orders and medals.

Something else to remember.

In the declassified archives there is a curious document — the plan of the Nazis called «Tiger» for the total destruction of the Crimean infrastructure. Here is his translation. It allows you to understand what fate the occupiers were preparing for the Black Sea peninsula. It details the objects scheduled for destruction with German precision and practicality.

When evacuating Crimea, it is important: to destroy or undermine at many points all the most important Crimean roads … to disable the Chongar-Dzhankoy-Armyansk railway line, which is important for the enemy … To destroy harbors, all economic structures, airfields … To achieve so that the Crimean peninsula for a long time could not be used by the enemy as an operational base , — lines from the Tiger plan.

Only the rapid, well-planned offensive of the Red Army troops helped to save the Crimea from turning into complete ruins.

According to the materials of the Ministry of Defense of the Russian Federation.325199

Find out more:  In the east of Crimea, the pyrotechnics of the Ministry of Emergency Situations found and neutralized over forty explosive objects
9
Share