On the Ai-Petri plateau and the Angarsk pass, vacationers are injured and lost 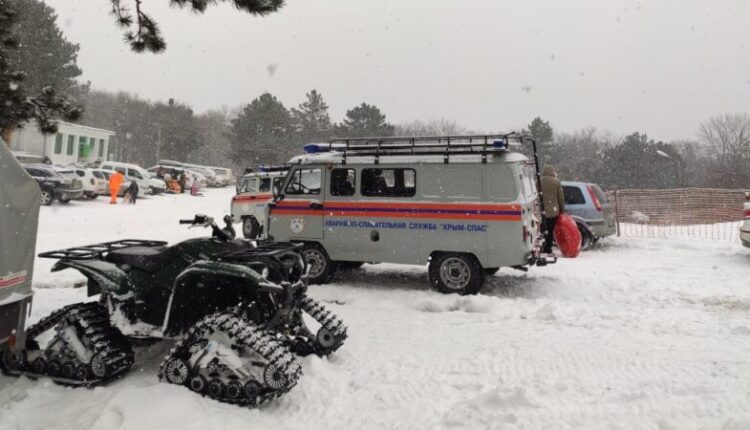 According to the Minister of Emergency Situations of the Republic of Crimea Sergey Sadakliev, given the large number of tourists in the mountainous forests and the steady snow cover in the mountains, the rescuers of the GKU RK «Crimea-Spas» are on duty on the Ai-Petri plateau and the Angarsk pass. At the same time, rescuers note a large number of injured.

Only in the past 24 hours, on the Angarsk Pass, the Rescuers rendered assistance to the victims 6 times while skiing, two more got lost, were found by the rescuers. These are mainly back injuries, craniocerebral injuries, fractures, abrasions, etc. received during the holidays. In total, employees of KRYM-SPAS carried out 21 departure yesterday to provide assistance to citizens , — quotes the press service of Sergei Sadakliev.

According to the minister, rescuers are patrolling the territory on off-road vehicles. They carry an Akya rescue sled to transport the injured. The personnel are equipped with the necessary rescue equipment, equipment, radio communications and entrenching tools. If necessary, rescuers can immediately call an ambulance for the injured.

Abrasions, bruises, fractures are just a small list of injuries in which the victims need help , says Sergey Sadakliev. — In addition, precipitation in the form of snow and ice poses a danger to motorists making ascents and descents, since unsuitable vehicles will not pass under these conditions. Rescuers work with vacationers, talk about the rules of safe behavior and explain the risks that arise in conditions of worsening weather conditions in a mountainous forest area.

Find out more:  Roskomnadzor revealed over 117 thousand fakes about a special operation in Ukraine

Also, as part of the preventive work, the personnel of the Simferopol, Bakhchisarai, Belogorsk and Sudak emergency rescue teams «Crimea-SPAS» are involved, which patrol the mountainous forest zone of the peninsula.

Crimean rescuers remind residents and guests of the Crimean peninsula that in conditions of low air temperature in winter, it is necessary to strictly observe the rules of safe behavior. Climbers and lovers of winter recreation are strongly advised to refrain from walking in mountainous forest areas, and during the period of worsening weather conditions, exclude being in hard-to-reach areas of the Crimean mountains.

The Ministry of Emergency Situations of the Republic of Crimea also appeals to motorists: on the highways of the peninsula, there is a possibility of accidents associated with disruption of transport communication and the formation of congestion as a result of an accident and complicated conditions for traffic, especially in low areas, on long descents and ascents, dangerous turns. We recommend that motorists who go on a long journey, monitor the traffic situation, do not neglect safety rules and observe the speed limit.

The Ministry of Emergency Situations also strongly recommends to be careful during winter skiing.

photo: press service of the Russian Emergencies Ministry in Crimea

Ministry of Emergency Situations of Crimea: the road to the Ai-Petri plateau is closed on both sides