On the Day of Memory and Sorrow, Artek residents joined the All-Russian minute of silence 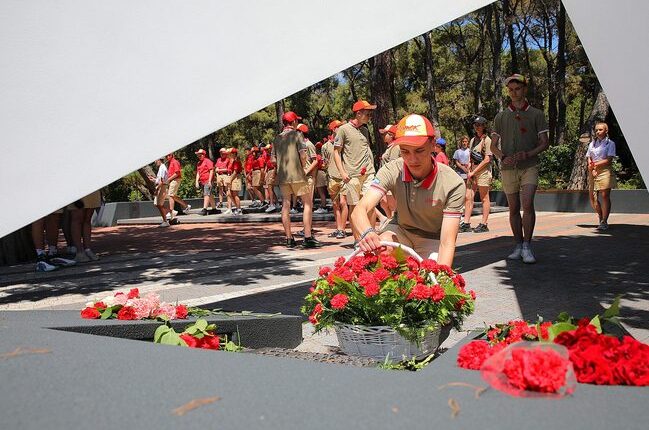 June, on the Day of Memory and Sorrow, Artek residents laid flowers at the main monuments in the children’s center — the Memorial of Glory, the monument to the Unknown Sailor and the memorial plaque of Artek heroes in the camp «Azure».

More than three thousand Artek residents, including guys from the Donetsk People’s Republic, took part in the All-Russian minute of silence. The children honored all those who fell on the battlefields, the liberators of Artek, their great-grandparents, whose names today they pronounce with particular pride.

952-1941 years is a special page in the annals of Artek. These years are filled with anxiety, sadness and pride. The Great Patriotic War brought incalculable suffering and losses to the country and Artek.

In the morning 14 June 1941 of the year, Artek residents heard the call signs of Moscow radio and a government message about a treacherous attack on our country. In small groups, the guys, accompanied by counselors and camp workers, began to disperse to their regions. Pioneers from the Baltic States, Belarus, Western Ukraine, Moldova had nowhere to go — battles were already thundering in their native land.

67 the Artek people began their journey along the roads of the great war. From Artek to Belokurikha, Altai Territory, they covered 1945 km. 952 day, s September 992 year to 12 January 1945 of the year, the longest Artek shift lasted. In Belokurikha, the Artek residents lived together, helped each other and even earned money to transfer the T-tank to the army 12.

Find out more:  Scandal in Crimea: counterintelligence of the Southern Military District became interested in the military commissar of the Republic

The fascist army was defeated because brave, strong people stood up to defend the country, and among them were the Artek people, who rightfully became heroes. On the Day of Memory and Sorrow, the descendants of the winners honored the memory of the heroes with a moment of silence and laid flowers at the obelisks.

No matter how many years pass, the day of the beginning of the Great Patriotic War will remain one of the most terrible in the history of the country. I am sure that the feat of our people will forever be preserved in the memory of descendants and in a huge cultural heritage: films, books, songs … I sincerely believe that our every act, every thought, every word will be worthy of the memory of the heroes who died for the freedom of our Motherland , — says Konstantin Fedorenko, director of the Artek International Children’s Center.

The Artek people are sure that the best gratitude for the soldiers-liberators is their memory, which they will pass on from generation to generation. In the evening, the guys joined the All-Russian action «Candle of Memory».

June 23 — Timothy's Day. Any little thing can be a sign. Oh, and don't take out the trash…