Over the past weekend, «KRYM-SPAS» twice provided assistance to victims in the mountain-forest area 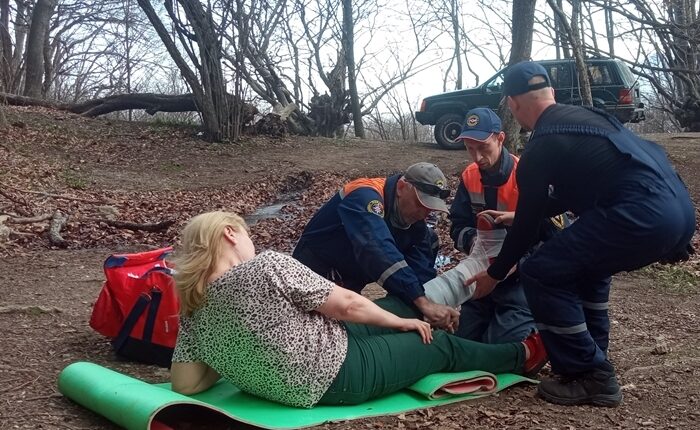 Sunday afternoon (at : ) the Ministry of Emergency Situations received a message that a woman injured her leg near the Yubileiny spring in the area of ​​u200bu200bMount Demerdzhi, and cannot move independently. The help of rescuers is needed in the evacuation of the victim. The shift on duty of the Alushta emergency rescue team «CRIMEA-SPAS» immediately left for the scene of the incident.

Rescuers rendered first aid to the victim. A Cramer splint was placed on the injured leg and a Snowball Cooling Pack was used. Then, on a special stretcher, the victim was transported to an ambulance for further hospitalization , — said the Ministry of Emergency Situations of the Republic of Crimea.

In the evening (at 13: 13) in «CRIMEA -SPAS» there was a message that in the area of ​​the cave «Red», a woman from the tourist staff fell and broke her arm. Rescuers need help. The duty shift of the Simferopol emergency rescue team «Crimea-SPAS» immediately left for the scene. Rescuers immediately provided first aid to the victim. The unlucky tourist was promptly taken to the hospital.

Find out more:  In Crimea, 40 facts of remote fraud were registered in a week
5
Share

Incident in the Crimean village of Perevalnoye: a man fell into a gorge

In Crimea, the “cuckoo” mother was punished, forcing her to work hard for the benefit of her own children