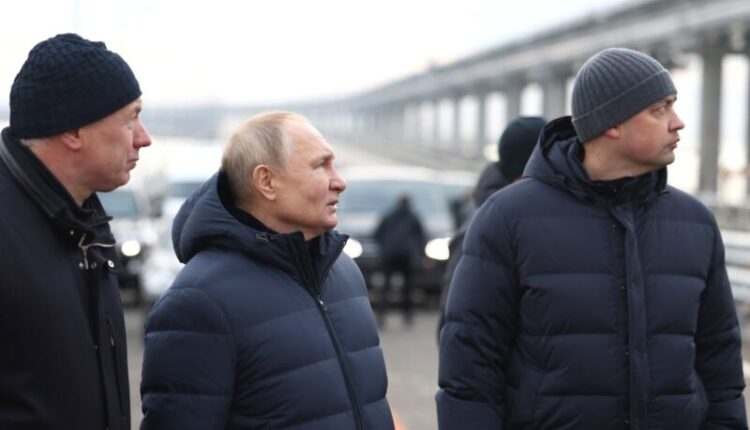 The repair of the Crimean bridge will be completed ahead of schedule.

Russian President Vladimir Putin announced in Bishkek that the repair of the Crimean bridge would be completed ahead of schedule: the automobile part — in March, the railway line — in the summer.

They promise to make the automotive part sometime in March. They planned later, but they told me that they would finish it by the end of March, and they promised to do the railway part, one branch, somewhere in the middle of summer. True, at first they said — at the end of autumn, then they nevertheless promised by the middle of summer. I think that they will probably do it somewhere in the summer , the Head of State told reporters on Friday.

Putin called the Crimean bridge an important project for the whole country. He said that he went there to support the builders and make sure on the spot of the quality of the work performed.

He admitted that, «of course, I wanted to see if it was true or not«.

Because it’s one thing what they say in official reports, and another thing when independent people give information, it’s important to have this information … It’s the same in this case with the bridge, I wanted to see it myself how it is actually done , Putin noted.

According to him, the Crimean Bridge is being repaired “ very well, with high quality ”.

It was really made in terms of quality, technologies used, at the highest technical and technological level , — said the President of Russia. —

I am sure that everything will be done on time. No doubt.

Putin recalled that “ there are two lanes nearby in working order, but still the builders believe that there are some centimeters, millimeters that need to be brought to one hundred percent normative state «.

Just in a preventive manner, as they say, they will do it. I agreed with them. They will now close two lanes or have already closed, I don’t know, and they will bring them there to one hundred percent norm , the Head of State said.

He drew attention to the fact that the Crimean bridge actually consists of three bridges.

At the top is another bridge, a railway one. One branch works in full, without limiting the tonnage, the cargo flow is going on , the President stated.

He explained that the second branch of the railway was damaged during the attack. It will be put in order before the beginning of autumn.

Find out more:  In the Kherson region, a notary chamber is being formed
Share

The President of Russia confirmed: there are no reasons for additional mobilization in the country