Rain and wind knocked down several trees in Simferopol 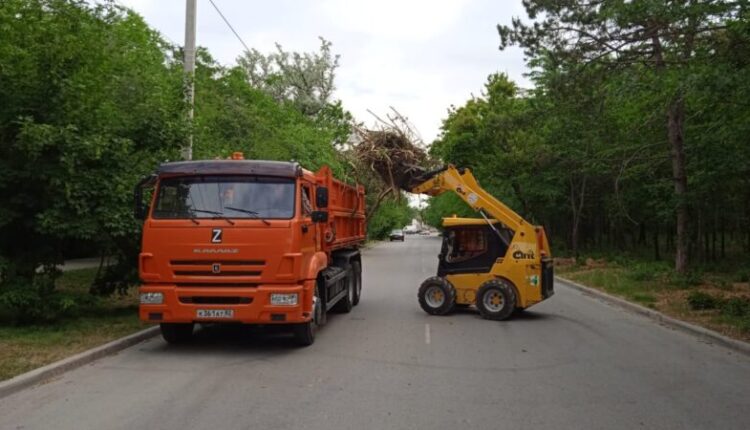 According to the Unified Duty Dispatch Service, in Simferopol, due to bad weather, from June 6 to 7, facts of falling trees and large branches along five streets were recorded — Vesennyaya, Vorovskogo, Titova, Lavrinenko, Karl Marx.

Due to heavy rain and gusty wind, the institution received signals from the EDDS on the fall of green spaces. Employees promptly went to the site and sawed and removed fallen trees and large branches. Part of the work was performed by employees of other services. At the moment, work continues on a number of streets , — said Anton Gumen, director of the City Municipal Budgetary Institution.

Also this morning traffic was paralyzed on Lenin Boulevard. Dry poplar fell right on the road.

Works on sawing the emergency tree and removal of logging residues have been carried out. As a result of the incident, there were no victims , — the public utilities reported.

Work on sawing and removing emergency trees and branches from the streets of the Crimean capital continues. Also, workers continue to work on storm sewer networks (“storm drains” are covered with broken branches and fallen leaves).

Cleaning of storm sewer networks is carried out on an ongoing basis. During heavy rains, soil, branches and stones, as well as household debris, get into the systems, so we promptly clean all clogged areas to ensure the discharge of water from the roads. We pay special attention to the most flooded areas in the city, — noted Anton Gumen.

Find out more:  In Simferopol, they decided to postpone the blocking of traffic on Karaimskaya Street
11
Share

23 people were hospitalized, 25 patients were discharged. COVID-19 in Sevastopol

In Simferopol, the wind felled trees, and the rain washed away the road — a…