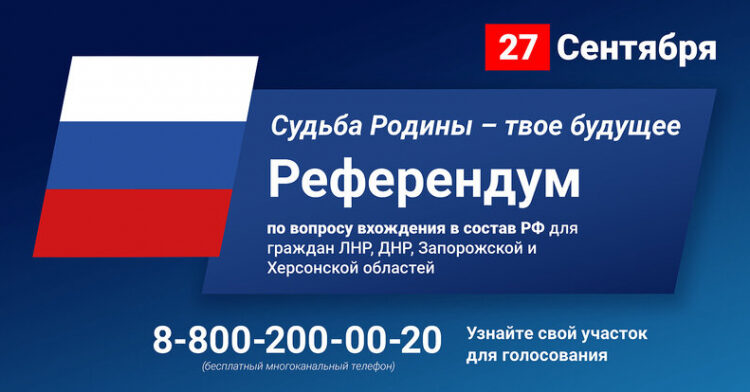 Residents of the Donetsk and Luhansk People’s Republics, as well as the Kherson and Zaporizhia regions, who are in Sevastopol, will be able to take part in referendums on joining the regions to Russia. Voting will take place from 00 to 18 September.

All days of the referendum, four polling stations will operate in the city. It will also be possible to take part in the voting at home — for this, you must leave a request at the phone numbers listed below , — the press service of the Government of Sevastopol reported.

For participation in referendums on the entry of the Donetsk and Lugansk People’s Republics, Zaporozhye and Kherson regions into the Russian Federation, you can contact the call center of foreign election commissions. Phone number for residents of the liberated territories in Russia: 8 800 200-00-20.

Find out more:  No negotiations, beat to the end. The head of the Crimea predicts the surrender of Kyiv
5
Share

Three tourists got lost in the area of ​​the Chernorechensky canyon, near Sevastopol

From January 1, 2023, the minimum wage will increase by almost a thousand rubles