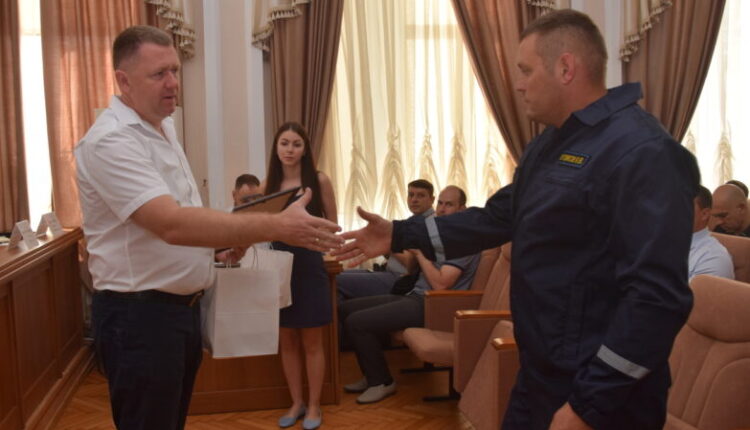 The head of the administration of Simferopol, Mikhail Afanasiev, awarded the employees of the KRYM-SPAS emergency rescue team, who at the end of June rescued children on a flooded bridge across the Salgir River.

Recall, 20 June, at 20: 58, the Ministry of Emergency Situations received a message that in Simferopol, due to the rise in the level of the Salgir River, two children were blocked on a pedestrian bridge. Three rescuers of the Simferopol ASO GKU RK «KRYM-SPAS» and one rescuer of «ROSSOYUZSPAS» immediately moved to the scene. As it turned out, the children, being on the bridge, watched the water flow and did not notice how the water cut off their path from two sides. About this incident — .

Upon arrival, rescuers Fyodor Spilny, Igor Tsepa, Anatoly Volgin and Vitaly Kuzyakov quickly assessed the situation, forded the flood branch of the Salgir River, put up a rope railing and evacuated two children, 2008 and 2009 year of birth to the safe area. The rescued did not need medical assistance.

Today the rescuers were awarded Letters of Appreciation. True, real men do not consider themselves heroes. They say they were just doing their job.

Find out more:  In August, Russians tend most of all to Sochi, St. Petersburg and Kaliningrad, and abroad - to Kyrgyzstan and Armenia
5
Share