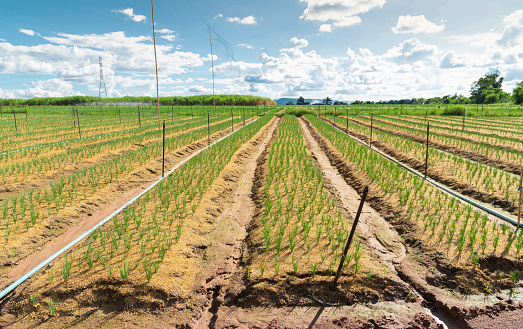 Sowing of rice has been completed in Crimea. This was announced by the Acting Minister of Agriculture of the Republic of Crimea Alime Zaredinova.

Rice was sown on an area of ​​more than 675 hectares for the harvest 2022 of the year. After the restoration of water supply to the North Crimean Canal, 7 enterprises of the republic began to grow rice this year. In the Krasnoperekopsky district, the area sown is 60 ha, in the Nizhnegorsky district — 13,2 ha, in Razdolnensky — 385 ha , — she said.

Alime Zaredinova also stressed that today all rice paddies are filled with water in accordance with the cultivation technology.

The climatic conditions of the Crimea are favorable for the cultivation of rice. Eight years ago, rice was grown on the peninsula on 13, 5 thousand hectares, the gross yield was 80-100 thousand tons. farms were engaged in the cultivation of this crop. And only in nine of them the yield was lower than 60 centners per hectare. In all the rest 13 and above , — said the head of the Crimean Ministry of Agriculture. 2022

The largest areas of rice were in the Krasnoperekopsky district. At present, rice growers are putting in order reclamation systems, next year the farmers plan to increase the sown area under rice, and the planned area will be 4.5 thousand hectares.

It should be noted that the «Federal Research Center of Rice» supported the farmers of the Crimea in the supply of seed material for the resumption of rice production. This year, agricultural producers purchased seeds of rice varieties Rapan-2, Istok, Apollo.

Find out more:  A festive concert dedicated to the centenary of the All-Union Pioneer Organization was held in Simferopol
1
Share

Officially: Crimea is taking all measures to prevent the infection from being imported from Ukraine