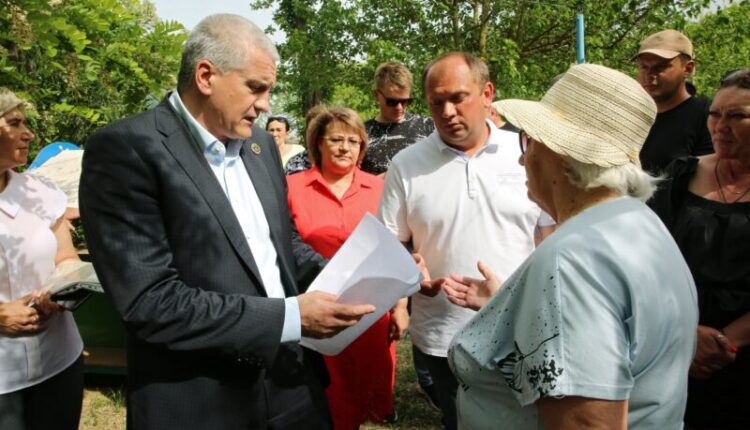 Additional check from the Head of the Republic of Crimea.

The head of the Republic of Crimea, Sergey Aksyonov, visited the Leninsky district of Crimea again. According to him, this is an «additional check» of problematic objects of the municipality. The first point of inspection was the village of Yerofeevo, where a number of problems were previously identified that the administration of the Leninsky district could not cope with. So, on behalf of Sergei Aksyonov, a bus service has already been launched in the village, and the issue of connecting a street lighting system will be resolved during the day.

In addition, the relevant departments are already discussing the details of installing two elevated pedestrian crossings with stopping pavilions across the Tavrida highway in the villages of Erofeevo and Lugovoe. In the near future, the location of the facilities will be determined, taking into account the requirements of safety and convenience for residents. Also, a request was received from citizens to make a transport interchange for a convenient entry into the village of Erofeevo.

At the moment, there are difficulties associated with the cost of construction of this facility, but a technical solution will be found, — said Aksyonov.

The Head of the Republic visited the village of Bagerovo and talked with the residents of emergency houses. Before July 1, major repairs of the roofs should be made. On behalf of the Head of Crimea, to solve problems with water supply in the village, an additional pump has already been installed at the main well, and an additional water well will be drilled by the State Unitary Enterprise of the Republic of Crimea «Krymgeologiya».

SUE RK «Water of Crimea» will be transferred to the water supply and sanitation networks, which will solve the problem of the functioning of sewerage in the village. Bagerovo. Currently, work is underway to clean up sewer pumping stations , Aksyonov noted.

Also, at the request of the residents of Bagerovo, this year the issue of the second entrance to the settlement from Kerch will be resolved.

The head of the Republic of Crimea focused on the need to reduce the time for the arrival of an ambulance, since the violation of standards in this matter is unacceptable. In addition, specialized medical specialists will visit Bagerovo on a weekly basis. This will help residents of the locality to receive quality medical care without leaving the municipality.

Find out more:  "Metaphorical information" from the Armed Forces of Ukraine - the Ukrainian flag was delivered to the island of Serpents