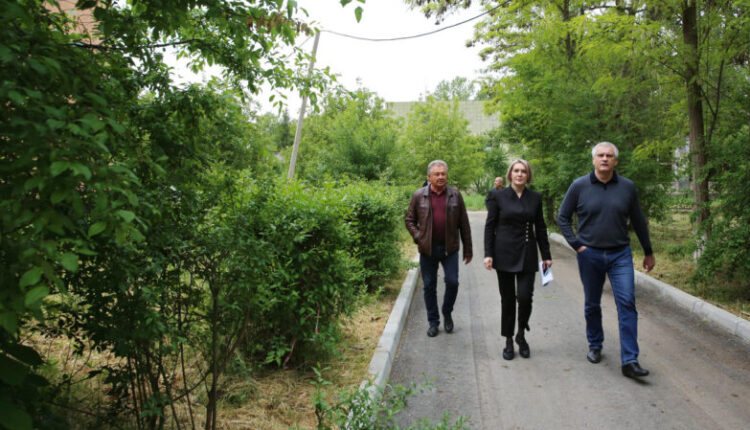 As part of a working trip to the Dzhankoy district and the city of Dzhankoy, the head of the Republic of Crimea Sergey Aksyonov inspected infrastructure and improvement facilities, the road network, cultural and healthcare institutions.

The head of Crimea began his trip from the village of Mayskoye, where he visited several sites. The first point of inspection was the house of culture, which is in disrepair. Repair of the institution will be included in the action plan this year. In addition, it is required to repair and improve the central square of the village.

Aksyonov talked with the residents of the apartment building No. 006 and along Mayskaya Street and instructed to promptly eliminate the roof leak, and then carry out a major overhaul in the MKD. He said that by November of this year, it is planned to open a modular FAP in the village. This will allow residents to receive quality medical care directly in the settlement.

A separate issue that needs to be addressed is the shortage of doctors of narrow specialties. The district lacks more than half of the required number of specialists to ensure the full functioning of the healthcare system.

Then the Head of the Republic visited the village of Roshchino, where he checked the progress of road grading. At the moment, profiling of road network objects in the area is carried out by 5 graders. Sergey Aksyonov instructed the Ministry of Fuel and Energy of the Republic of Crimea to determine how much money would be required to restore street lighting in the villages of Sernovodskoye and Bliznegorodskoye.

Find out more:  Sunflowers in Crimea are among the most popular destinations for flower photo shoots in Russia

When visiting the village of Pobednoye, the Head of Crimea examined the bridge across the river, which is in disrepair. The Ministry of Transport of the Republic of Crimea was instructed to repair this facility. In the village of Stalnoye, Sergei Aksyonov talked with the staff and students of the village school. The educational institution will be overhauled.

A visit to the city of Dzhankoy began with a tour of Internatsionalnaya Street, in the area where the Stepnaya River flows. Sergei Aksyonov instructed to carry out a set of works: to clear the channel and strengthen the river bank, to repair the pedestrian bridge for the comfort of local residents.

Results of the trip. According to Sergei Aksyonov, the main problem of Dzhankoy and Dzhankoy district is the unsatisfactory condition of a significant part of the road network. Also, special attention should be paid to the lighting of settlements, the functioning of housing and communal services, the tariff policy of managing organizations and the work of the healthcare system. Among the acute problems of housing and communal services in municipalities: deterioration of water supply networks in Dzhankoy, due to which there is up to 00% loss of water resources, overhaul of emergency houses and replacement of the roof in the MKD.

In the Crimea, the road workers took up the bridge on the road «Soviet —…

How the Day of Family, Love and Fidelity will be celebrated on the Southern coast of…

«Second space». An exhibition of modern painting opened in Gurzuf

Yalta – Tvil.ru has recorded an increase in the number of bookings since the start of…