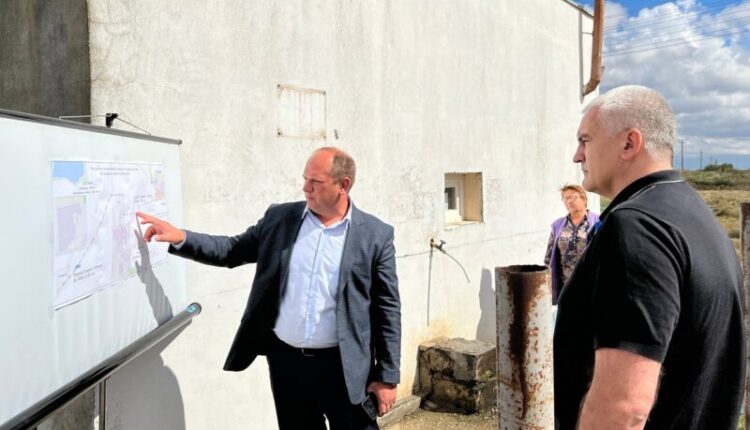 21st century… There is no water or sewerage in the houses of the villagers.

Head of the Republic of Crimea Sergey Aksyonov visited a number of settlements as part of a working trip to the Razdolnensky district.

The first point of inspection was the village of Glorious. At the moment, the main source of water in the settlement is a water treatment plant, which is run by the State Unitary Enterprise of the Republic of Crimea “Water of Crimea”. Every day, residents are given free of charge about 449- liters of purified water. Also, upon request, deliveries are made to educational institutions, twice a week — to residents of the village of Kotovskoye.

This problem will be solved by the repair of the centralized water supply system and the construction of a main water conduit to provide drinking water to the inhabitants of the villages of Slavnoye and Kotovskoye. On the territory of the nearest village of Slavyanskoye there is an artesian well, which will provide both settlements with water. The cost of the planned works is 40 million rubles, and the task of construction and repair will be entrusted to the Krasnoperekopsky branch of the State Unitary Enterprise of the Republic of Crimea «Water of Crimea» , — said Aksyonov.

The head of the Republic of Crimea instructed to start work on October 1 and complete them within five months. Daily monitoring of the process should be provided by the head of the administration of the Slavnovsky rural settlement, Nelya Kharchenko, and the director of the Krasnoperekopsky branch of the Water of Crimea enterprise, Vitaly Yatsishin.

The possibility of installing a modular station for sewage treatment facilities is being considered.

On behalf of Sergey Aksyonov, a technical version of the solution should be proposed by Monday and the required amount of funding should be determined.

Photo: press service of the Head of the Republic of Crimea.

Another dangerous finds in the Crimea. How much ammunition was destroyed this year by the pyrotechnics of the Ministry of Emergencies