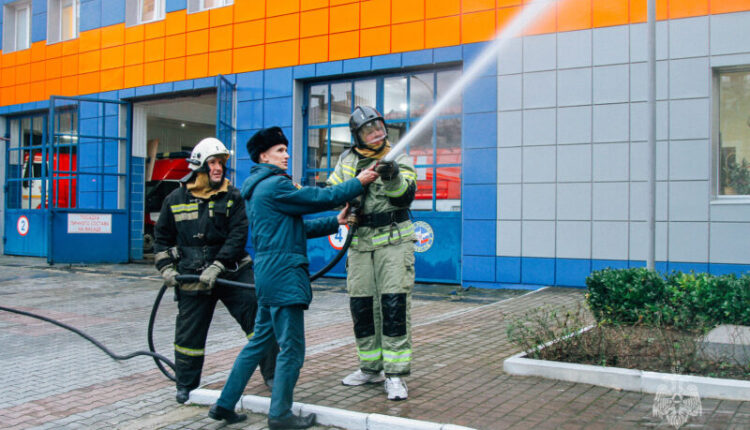 The action «Christmas Tree of Desires» at the end of December united many Sevastopol residents striving to do good deeds and give a miracle to those who so needs it. At that time, the Main Directorate of the Ministry of Emergency Situations of Russia for the city of Sevastopol received a letter from the mother of a young man named Maxim, who has health conditions. The woman said that her son was always inspired by stories about brave firefighters and to see how emergency workers work is his old dream.

On New Year’s Eve, Maxim’s wish came true. At the appointed hour, a bright firefighting and rescue service car arrived right at his house. He rushed off the guy towards vivid impressions.

In the 1st fire and rescue unit, Maxim was given a personal tour: they showed the elements of the equipment of rescuers, equipment used in extinguishing fires, demonstrated how the tools necessary for emergency rescue work work. Also, the guest was invited to visit the cabin of a fire engine, and was taken to the service premises of the unit.

At the end of the tour, Maxim was offered to try himself as a firefighter: dressed in combat clothes, he took a seat in the car. With the beacons and sirens turned on, the equipment moved out “to the call”, and upon arrival at the place of the simulated fire, Maxim was able to supply water for extinguishing from the fire hose.

After her son’s visit to the fire department, the woman sent another letter to the Russian Emergencies Ministry for the city of Sevastopol: “Thank you for giving my son a New Year’s miracle! He saw the work of your department from the inside and got acquainted with a well-coordinated team of professionals!”

KFU expert knows when it will snow in Crimea

Everything for Victory: Yalta City Council of Veterans continues to actively support the participants of the NWO