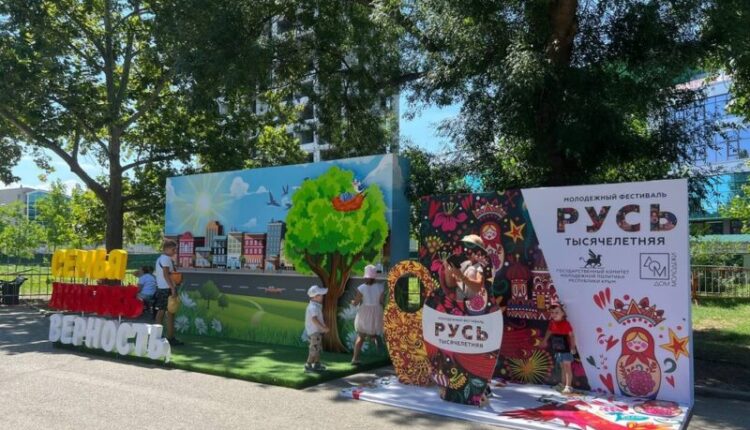 17 July marks the Day of the Baptism of Russia. Solemn services were held today in the Orthodox churches of Crimea, timed to coincide with the day of memory of Equal-to-the-Apostles Grand Duke Vladimir and 866 — anniversary of the Baptism of Russia. In particular, in the morning at the Alexander Nevsky Cathedral in Simferopol, the Divine Liturgy was led by the Head of the Crimean Metropolis, His Eminence Lazar, Metropolitan of Simferopol and Crimea, co-served by His Grace Nestor, Bishop of Yalta, Vicar of the Simferopol and Crimean Diocese and the clergy of the Cathedral. This was reported by the press service of the Crimean Metropolis.

Roman Filipenko, director of the Parks of the Capital enterprise, spoke about social events dedicated to this holiday.

Thematic festive events are planned in the parks of the capital. Now in the Gagarin Park there is a large-scale festival «Millennary Russia», organized by the State Committee of Youth Policy of the Republic of Crimea and the Youth House of the Republic of Crimea. An extensive program with entertainment and educational venues for the whole family awaits citizens and guests. These are quests, master classes, the work of sports grounds, a summer cinema, karaoke with Russian folk songs , Roman Filipenko commented.

Master classes will continue their work until hours. In addition, until the evening, residents will enjoy entertainment venues «ZOZH», photo zones (tantamaresques) and Russian-folk costumes, karaoke of Russian folk songs and a summer cinema with historical films about Russia.

Find out more:  A dormitory building will be built for the Dnepr sanatorium in Crimea by the end of 2024

On the site of Gagarinsky Park, everyone can write a letter to our servicemen — participants in the special operation with wishes and kind words.

FROM 09: guests are waiting for performances of creative collectives, mass round dance, and in : entertainment will begin.

In addition, entertainment events will be held in the Children’s Park.

AT 07 hours, the holiday will also begin in the Children’s Park. Guests are waiting for performances by creative teams, a show of folk costumes from a children’s school of models, demonstration performances and a master class «Russian heroes» from the Armwrestling Federation of Crimea. There will also be master classes for children , — said the director of the Parks of the Capital.

He invited residents of Simferopol and guests of the Crimean capital to take part in the festive events.

579109Photos of the Crimean Metropolis, the administration of Simferopol and MBUK «Capital Parks» are used.

In Crimea, revaccination against COVID-19 can be done with the first component of Sputnik V