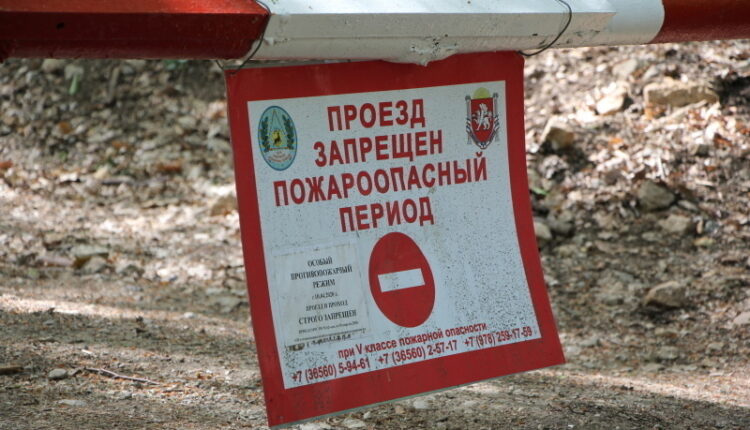 From 20 May, by order of the Ministry of Emergency Situations, a special fire regime was introduced in Crimea. Such a measure was taken in order to prevent the spread of fires and reduce the threat of possible emergencies.

A special fire regime was introduced due to the predicted establishment of Ⅳ and Ⅴ fire hazard classes on the territory of the Republic of Crimea due to weather conditions, the lack of improvement in the fire situation (according to the forecast meteorological conditions), with increased wind and the risk of major dry fires. vegetation in the adjacent territories with the forest fund , — reported in the emergency department.

The Main Directorate of the Ministry of Emergency Situations of Russia for the Republic of Crimea draws the attention of citizens to the fact that a special fire regime implies the introduction of additional, enhanced fire safety requirements, as well as the readiness to respond to possible emergency situations of forces and means of all parts of the territorial subsystem of the RSChS.

During the special fire regime, it is strictly forbidden to burn dry grass, garbage and carry out fire hazardous work within the boundaries of rural and urban settlements, urban districts, horticultural and horticultural non-profit partnerships, at enterprises, on lands of all categories — with the exception of works conducted by specialized organizations in order to prevent forest fires. At the same time, violation of the requirements of fire safety rules in the forest and in areas directly adjacent to forests is prosecuted by law , the rescuers reminded.

Find out more:  "Theft of the century" in Kerch: a thief stole a bag with one and a half million rubles
3
Share

In Bakhchisarai, a man fell into the bed of the Churuk-Su River and could not get out. «Crimea-SPAS» came to the rescue