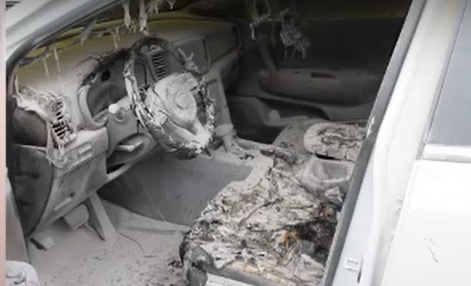 In Simferopol, the police received a report from a 43-year-old local resident that at night an unknown man threw a burning object through the window of his car, which completely burned down the interior of the vehicle.

An investigative team immediately rushed to the spot. During a conversation with the victim, police officers found that the man has an acquaintance with whom he has recently had a difficult relationship.

Officers of the battalion of the patrol service of the Department of the Ministry of Internal Affairs of Russia for the city of Simferopol, in hot pursuit, detained a 61-year-old resident of the Simferopol region.

The detainee confessed to everything and said that he knew the victim. They run a construction company together. About a month ago, the detainee took on credit 550 thousand rubles for the development of the company and handed it over to his partner on receipt. But when the time came to pay the debt obligations, the victim did not give back the money. The suspect took a hammer, gasoline and matches, and went to his partner’s house. Seeing a parked car, he broke a window, doused the passenger compartment with a combustible mixture and set it on fire, after which he tried to escape, but was detained by police officers , — the Ministry of Internal Affairs for the Republic of Crimea said.

According to part 2 of Art. 167 of the Criminal Code of the Russian Federation (deliberate destruction or damage to property, committed out of hooligan motives, by arson, explosion or in any other generally dangerous way, or negligently resulting in the death of a person or other grave consequences), a criminal case was initiated. The sanction of the article provides for punishment in the form of imprisonment for a term of up to five years.

In Yalta, the police detained the robber-recidivist