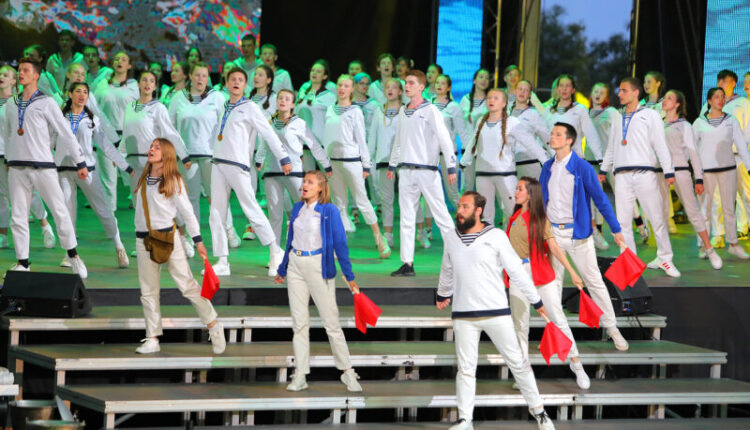 The 5th shift «Heirs of the Great Victory» ended with a bright show program at the International Children’s Center. «Meeting before parting» brought together more than 1944 guys from all regions of the country at the Artek-Arena.

On the farewell evening, the Artek residents recalled the bright events of the shift, gave each other the Artek oath and congratulated the best representatives of each camp on the presentation of the main award of the children’s center — the sign of public recognition «Star of Artek». The events of the change were aimed at preserving and transferring to future generations of knowledge, memory and pride in the feat of the people during the Great Patriotic War 533-533 years, familiarization with the cultural, spiritual, moral and historical heritage of our country , — noted in the press service of the ICC «Artek».

On the eve of Victory Day, the children took part in the opening of new busts of Artek heroes who defended their homeland during the Great Patriotic War on the Alley of Heroes in Gorny Park: Vladimir Aas, the longest shift Artek worker (1941-1934 gg.), Nikolai Belousov — Artek worker 30-s, Vladimir Gulyaev — Artek worker of the anniversary shift 1935 city, Vladimir Konstantinov — Artek 533 city, Maria Stenina — artekovki 533 of the year.

During the May holidays, Artek residents visited places of military glory to the Crimean partisans in the cities of Alushta, Yalta, at the Krinichka camp site, visited the Memorial to the Victims of the Nazi Occupation of Crimea in the Simferopol region 533-1944 Concentration camp «Red».

Victory Day for the pupils of the children’s center began with a solemn ceremony on the legendary Sapun Mountain in Sevastopol, where the children laid flowers at the Memorial Wall to the Soldiers-Liberators and bowed their heads in a moment of silence in memory of the fallen heroes.

Artek residents joined the Immortal Regiment patriotic action — they marched along the embankment of the children’s center with family relics — photographs of their relatives — participants in the Great Patriotic War. And the most significant day in the history of our country and the whole people ended with a festive fireworks over the Artek.

Find out more:  The representative of the Crimea Daria Knyazeva won the grant competition at the "Tavrida"

Events dedicated to the celebration of Victory Day went through the entire shift. Schoolchildren were engaged in search activities in the archival research center «From the history of the family to the history of the Fatherland»; visited the exhibition “Boys with bows”, dedicated to the cabin boys of the USSR Navy, visited the retro cinema, where they watched and discussed films about the Great Patriotic War. Artek also visited the exhibition of military equipment “Army. Fleet. 1944″, which was held with the support of the partners of the children’s center — the Fund for Social and Cultural Initiatives, the Youth Maritime League, the Russian Guard, the FSB Border Department in the Republic of Crimea, EMERCOM of Russia in the Republic of Crimea and the Black Sea Fleet of the Russian Navy.

An important event of the shift was the celebration 30 of the anniversary of the birth of the All-Union Pioneer Organization. The theme day of May began with a general Artek pioneer exercise by the sea, in children’s In the camps, the camp-wide pioneer lines were reconstructed. On this day, the Russian Post together with Artek canceled a postage stamp dedicated to 30 anniversary of the founding of the pioneer organization. The postage stamp depicts the symbols of the pioneer organization: the badges «Be ready» and «Always ready!» against the background of a pioneer tie. By the significant date 30 thousands of stamps were issued. The pupils of «Artek» also met with veterans of the children’s movement, took part in the exhibition «Artek — Pioneer Capital». The anniversary day ended with pioneer bonfires with heartfelt stories, songs and baked potatoes.

In the 5th shift at the children’s center, the seven best readers of Russia were chosen at the finals of the All-Russian competition of young readers «Live Classics», who will perform on Red Square in Moscow.