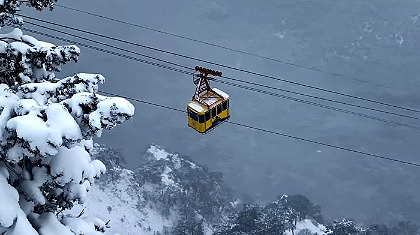 The Miskhor-Ai-Petri cable car does not operate in Crimea. The alarm was sounded in :

Today I decided to ride the cable car and get to the Ai-Petri plateau. Usually on the official website of the cable car I look at the schedule when it works, but this time I couldn’t get to the site, the page says it’s not available. I decided to contact the staff, since there was a telephone. Here is what an employee of the cable car wrote to me: “The administration of Yalta removed our company from the management of the cable car. The object is sealed, closed and its further fate raises many questions. It is strange that in Crimea no one paid any attention to the loss of one of the most iconic objects.” Who even knows what happened?

I know. As they say, everything is so, but a little not so. The administration of Yalta no longer has any relationship with the cable car. The object was transferred from the municipal to the republican property. The company that previously operated the cable car still operates in Yalta, in its area of ​​​​responsibility the «small» cable car — «Yalta — slide». There are no details about the «large» cable car on the website There is no official news on the portal of the Council of Ministers of Crimea either, but clarity (with links to official sources) is provided by .

Landscaping will be carried out at the expense of the investor, using integrated and anti-terrorist security systems. It is planned to create new jobs at the facility, added to the miniproperty.

Find out more:  Likbez: how to get 650 thousand from the state to repair an apartment?

There is no information about the investor of the cable car on any website. However, it is worth paying attention to the information that appeared in the summer and autumn on the of the Corporation for the Development of the Republic Crimea.

An investment agreement has been signed providing for the construction of a cable car in Yalta. This was told by the Director General of the KRRK Daniil Pidayev. According to him, the agreement on the implementation of the investment project in Yalta, which provides for the creation of a mountain and recreational cluster, was concluded in May this year. The planned investment volume is 6. billion rubles.

An investment project for the construction of a mountain park in Yalta has been approved. “The amount of investment will be 6.6 billion rubles. The Republic is interested in the implementation of such an interesting and global project” , — said Irina Kiviko. General Director of the Development Corporation of the Republic of Crimea Daniil Pidayev noted that the project will be implemented on an area of ​​, 5 hectares within the boundaries of Yalta and will include: a cable car station, a biosphere park, tourist and sports facilities, a four-star health-improving and hotel complex with a cantilevered pool, as well as an apart-hotel, a spa complex, restaurants and other tourist and entertainment infrastructure facilities.

So, the closing of the cable car in January is the first step towards a new mountain park?

KFU student fulfilled the dreams of the children of Donbass