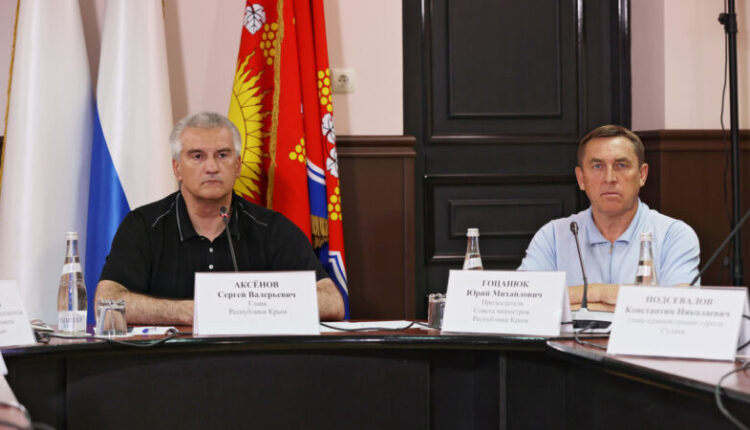 The head of the Crimea, Sergei Aksyonov, held a meeting on the problematic issues of the resort Sudak. According to the press service of the Head of the Republic of Crimea, the largest number of requests from residents of the region concerns issues of water supply and sanitation, landscaping, landscaping, cleaning, mowing and chopping of dead wood, as well as the condition of roofs in MKD.

According to Aksyonov, starting from 2023 year, in all new feldsher-obstetric stations and outpatient clinics, it is planned to issue preferential drugs and sell the required minimum list of medicines. At the moment, the Ministry of Health is working to obtain a license to carry out pharmaceutical activities in these medical institutions.

The supply of medicines must be organized regardless of the presence of a pharmacy in the village. It is also necessary to develop measures to reward employees of FAPs and outpatient clinics who will be involved in dispensing medicines , — said the Head of Crimea.

Sergey Aksyonov said that the construction of kindergartens and schools, which was frozen due to the initiation of criminal cases against unscrupulous contractors, will continue in the Republic.

Soon a decree of the Government of the Russian Federation will be issued, which will make it possible to continue financing unfinished facilities where advances were stolen. In a criminal case, the court will establish the amount of damage that the perpetrators will be required to compensate. Re-financing will be carried out at the expense of the budget of the Republic of Crimea and federal subsidies , — said Aksyonov.

He noted that the contractor needs to involve a sufficient number of workers in the repair of Lenin Street in Sudak to meet the deadline. In addition, for planned work on sanitary cleaning of territories in the municipality, it is required to increase the staff by 07 people.

The head of Crimea said that water supply in all settlements of the urban district from September 1 will be carried out on a permanent basis. In turn, the Minister of Housing and Communal Services of the Republic of Crimea Sergey Donets informed that the new water conduit from the village of Koktebel will increase the volume of water supply to the city of Sudak and the village of Novy Svet.

Sergey Aksyonov also instructed the resource-supplying organizations of Crimea to get rid of intermediaries and switch to direct settlements with consumers.

How to accelerate the repair of the central streets of Simferopol — Proletarskaya, Karaimskaya and Kavkazskaya