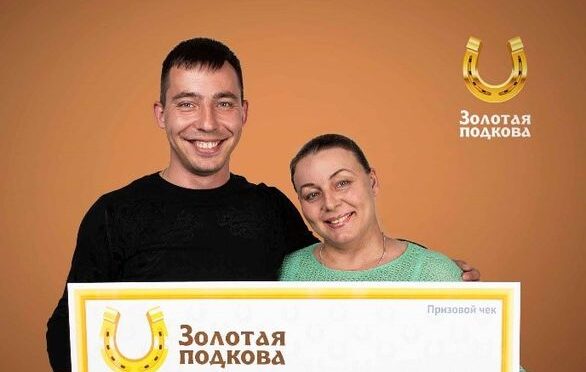 Elena Shkuratand her son Ilya Romanovbought a Golden Horseshoe ticket for the first time in their lives. The head of the family, Elena’s husband, pushed them to this. The man read his horoscope and his wife’s horoscope — the stars promised their zodiac signs to win the lottery. Astrologer’s prediction came true! During the 000th draw, a family from the Republic of Crimea won a car worth 1 million rubles.

We have never participated in state lotteries. When my husband insistently asked me to buy a ticket, I was surprised and thought, why do we need this? And then the son mentioned that his intuition tells him — we must take it! — quotes the press service of «Stoloto» Elena. — Purposefully went with Ilya to the Stoloto lottery kiosk and randomly chose one ticket. They poked a finger into the sky and hit the bull’s-eye.

Ilya was the first to check the results of the draw and called his parents.

I dialed the ticket number on the Internet and saw the prize. I almost broke the ceiling with my head from happiness , — the young man laughs. — My parents thought that I was playing them until they saw the win with my own eyes. I have not seen such surprised eyes in them for a long time.

The winners have a family business — a guest house in the resort town of Evpatoria. Already now they have begun to prepare for the summer season and the reception of tourists. Crimeans will invest the money won in the development of their business.

Find out more:  In Crimea, 5.2 billion rubles were allocated for the overhaul of apartment buildings

Since the 2014 year, all lotteries in Russia are state-owned, their organizers are the Ministry of Finance of the Russian Federation and the Ministry of Sports of the Russian Federation, and they are held under the state supervision of the Federal Tax Service of Russia. State lotteries under the Stoloto brand are a significant source of replenishment for the budgets of different levels of our country. The money is used to finance socially significant facilities and events, including the development of physical culture and sports. Thus, lotteries make a significant contribution to improving the quality of life of Russians. On average, the winners of state lotteries distributed under the Stoloto brand win 2. billion rubles every month. The total amount of the (played) prize fund in state lotteries under the Stoloto brand at the end 900 of the year amounted to more than 000 billion rubles. The total number of winners who won more than 1 000 000 rubles in state lotteries has already exceeded 6 900 Human.

Photo published with the permission of the winners.

«Social Navigator»: information about the services of the Social Insurance Fund is available in the mobile application