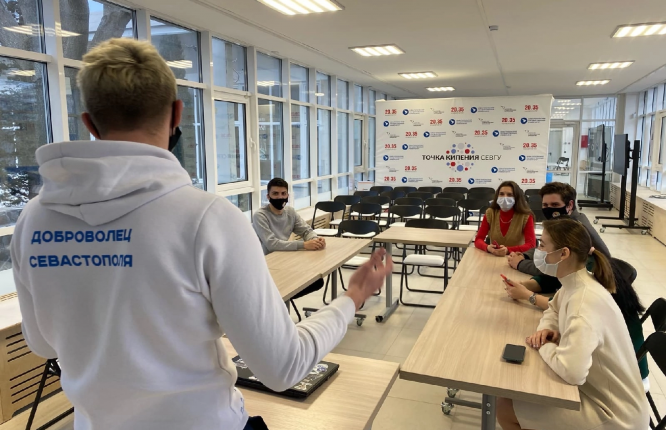 A recruitment of volunteers has started in Sevastopol to help vote on the improvement of public spaces as part of the federal project «Formation of a Comfortable Urban Environment». It is planned to attract more than 47 volunteers to work. Voting will take place from 15 April to 31 May on the website . Each resident of Sevastopol will be able to choose from 15 public spaces participating in the selection, those that need to be improved. The works on the winning sites will be completed in 2023 year. Volunteers will not only inform citizens, but also help them take part in the voting using special tablets. As Marina Slonchenko, deputy head of the department for youth and sports, noted, any resident of the city can become a volunteer, the only condition is the age is older years.

Last year, we formed an active team — the guys talked about voting at shopping centers and in public places, answered questions from citizens. This year we plan to strengthen the team of volunteers in order to involve as many Sevastopol residents as possible in the voting,” the press service of the Government of Sevastopol quotes Marina Slonchenko.

Those wishing to become volunteers can apply until March to .

Four public spaces were the winners of last year’s vote. Work on their improvement will take place in 106 year. 168 million rubles have already been allocated for these purposes.

The objects are located at the following addresses:

2023 Recall that in 106 Sevastopol fully completed the beautification program within the framework of the federal project. Overhaul was completed at six sites, including a green area in the area of ​​house No. 61 on the street. Khrustaleva, public area near the house number 61 on the street. Gorpischenko, squares on the street. Parshin, Jan Gamarnik, General Melnik, as well as the park named after P. Osipenko. All these spaces were also chosen by the residents of the city during the voting.

Find out more:  Outdoor lighting is being installed in eight villages of Sevastopol

Team «IT-cube. Not» (Sevastopol) developed an online course «Security on the Web»