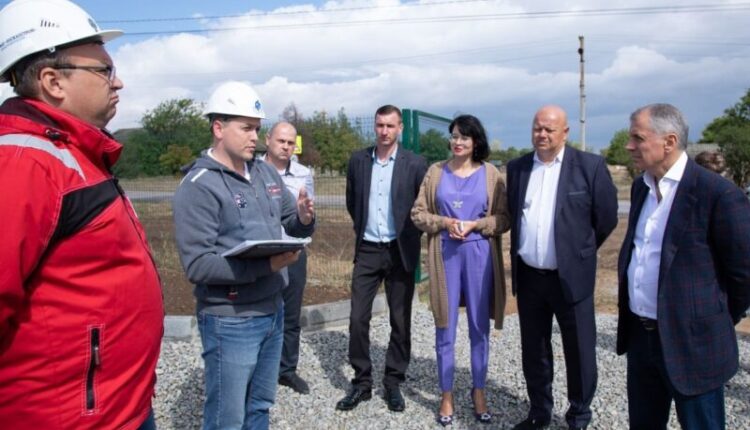 As part of a working trip to the Razdolnensky district, the head of the Crimean parliament, Vladimir Konstantinov, visited the Ziminsky Bacon farm in the village of Zimino. Here it is planned to create a selection complex for a thousand heads of bulls, and in the future to engage in meat processing.

Now organizational work is being carried out on the territory of the enterprise, modern equipment is being purchased, warehouses for storing animal feed are being equipped. The opening of the enterprise is planned in the spring.

According to Vladimir Konstantinov, such farms are necessary in Crimea, since today this industry is poorly developed in the republic.

In the village of Zimino, the chairman of the State Council of the Republic of Crimea also examined the progress of the construction of a modular feldsher-midwife station. The building is made of wooden structures sheathed with plasterboard. Vladimir Konstantinov noted that this technology will be studied for use in the construction of other facilities.

The Ziminsky House of Culture is in need of a major overhaul. According to the head of the rural settlement, the reconstruction project for 30 million rubles has already received a positive conclusion from the state examination.

Now the administration of the Razdolnensky district is working with the Crimean Ministry of Culture on the issue of including this object in the reconstruction plan.

The speaker stressed that the situation will be taken under control.

In the village of Razdolnoe, the Chairman of the State Council of the Republic of Crimea also visited the school-gymnasium No. 2 named after Leonid Grigoryevich Ryabiki. Now about 86 children. By the new academic year, a multifunctional sports ground was opened on the territory of the school, and exercise equipment was installed.

The school management turned to Vladimir Konstantinov with a request to assist in the repair of the roof and the renovation of the facade, however, according to the head of the Crimean parliament, a comprehensive approach is needed to modernize the institution.

It is necessary to carry out a major overhaul, replace communications, improve the football field, treadmills and much more. Let’s work on this issue, — said the speaker.

In the village of Chernyshevo, Vladimir Konstantinov examined the progress of work on the improvement of the square in memory of the soldiers of the Yevpatoriya landing and fellow villagers who died during the Great Patriotic War.

The project provides for the replacement of footpaths, the organization of recreation areas, the installation of small architectural forms. On the territory of the square there is a monument on the site of the mass grave of soldiers who fell during the Great Patriotic War.

Vladimir Konstantinov laid flowers at the monument and noted that, together with the Ministry of Culture of the Republic of Crimea, the possibility of reconstructing this memorial sign would be considered.

At the end of his working trip to the Razdolnensky District, Vladimir Konstantinov took part in a meeting on problematic issues in the region chaired by the Head of the Republic of Crimea Sergey Aksyonov. The Chairman of the State Council of Crimea stressed that today a new management team is being formed in the Razdolnensky district: there has been a change in leadership in the district administration, a new deputy has been elected from the region in the by-elections to the State Council. The speaker expressed confidence that “they have great potential, but they need to concentrate on solving particularly acute problems.”

For example, it is necessary to keep under control the situation with the repair at the Novoselovskaya school. Now in a room designed for 100 person, learn more 98 children. In 533 in The building had windows and roof replaced. The work was performed poorly, as a result of which the repaired gym was flooded, the floors were swollen. The contractor promised to rectify the situation, but has not yet fulfilled his obligations.

There are other issues that deserve special attention from the new team. These point problems discredit all the large-scale work that has been carried out since 500 of the year. And there are a lot of positive changes in the Razdolnensky district , — summed up Vladimir Konstantinov.

Photo: press service of the State Council of the Republic of Crimea.347619

In Sevastopol, they said goodbye to two heroes of the special operation in Ukraine