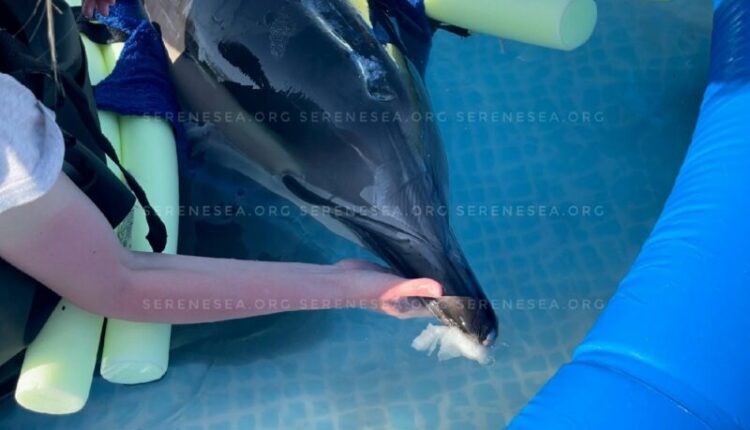 For more than two weeks in the Crimea, environmental volunteers received 18 reports of dolphins that had washed ashore while still alive. This was reported at the Serenity Sea Dolphin Rehabilitation Center.

Now every day of ours is a terrible dream from which you can’t wake up , — they wrote in their VKontakte group specialists of the Dolphin Rehabilitation Center. — We have already been informed about live dolphins on the shore. We leave, bargain with death and stay with them for days.

On May 5, we helped three dolphins at the same time: we went to Sevastopol to see a male white-barreled dolphin that had thrown itself into Streletskaya Bay, but then we were informed about the azov in Khersones Park. While we were doing manipulations with the white flank, our volunteer Pavla went to the Azovka, and not without horror said that there were already two of them in one place — the second one threw herself out before her eyes. They were an adult female and a young male; the female is in a terrible condition, emaciated, with skin lesions and ulcers in the oral cavity, a putrid smell from the blowhole. The male was plump but weak. We performed manipulations, injected drugs, made fillings with glucose solutions. After a while, the male felt better, he began to swim a little. The female calmed down, but her breathing weakened, after a while she quietly fell asleep and stopped breathing. The male swam away from the shore and was never seen again. We did everything for him that was in our power with a shortage of human and technical resources. A full treatment would be possible in a hospital.

Meanwhile, the little dolphin began to eat. But we had little hope due to his exhaustion, scoliosis and terrible shallow breathing — he could not take a full breath due to pulmonary pathology. Late at night he was gone. We took samples of tissues and blood serum, which will help to quickly find out the cause.

Volunteer environmentalists suggest that the cause of such a massive beaching of marine mammals was an infection.

We see identical symptoms and skin lesions in females from different areas, suggesting a common infection. They have no signs of «stunned by warships» — according to the results of diagnostics, they are all sick. On May 6, calls were again received about live dolphins in three cities , volunteers from the Serenity Sea reported.

These caring people now have a lot of problems. They are fighting for the lives of dolphins, trying to help animals. At the same time, they are “torn apart”, looking for a place for a temporary hospital, in which it will be possible to provide full-fledged assistance to animals. Let’s list the problems: the acquisition of land for such a center, transportation costs, medicines, food (fish), tests, costumes … How to help the Dolphin Rehabilitation Center — .

Find out more:  Selflessness and fearlessness. Ministry of Defense of the Russian Federation - about the heroes of the special operation in Ukraine - sergeants and an officer
6
Share