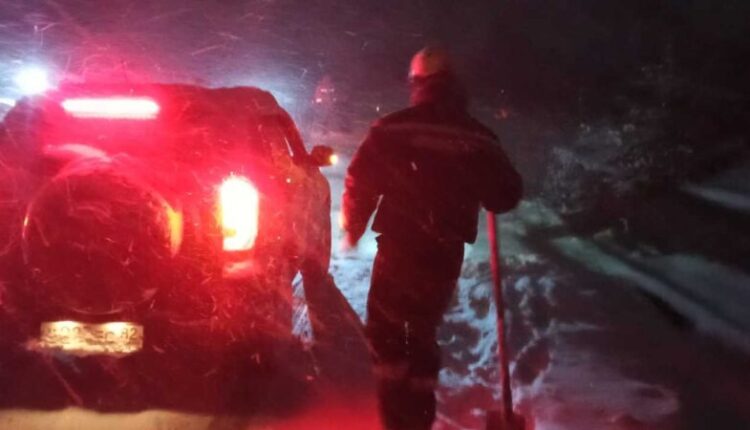 Winter in Crimea adds work to rescuers every day. The night before — at 17-23 — a message was received from the on-duty MKU «EDDS of Sudak» that due to worsening weather conditions, heavy snowfall and a decrease in temperature, on the Sudak-Novy Svet highway, cars got stuck in a snow drift, the movement of vehicles was stopped.

Upon arrival at the Sudak-Novy Svet mountain road, a cluster of cars was found with a total number of 23 adults in them and children. Using a cross-country vehicle and rigging equipment, rescuers evacuated more than 30 cars from snow drifts. Subsequently, they ensured traffic safety until the approach of municipal special equipment and the treatment of the roadway with a sand-salt mixture , — note the press service of the Russian Emergencies Ministry in Crimea.

In addition, in 18-20 a message was received from a resident of Belogorsk that on the Karabi Yayla plateau, in the conditions of snowfall on a steep slope, he got stuck in a Toyota car. There were three minor children in the car.

A duty shift of the Belogorsk ASO GKU RK «CRIMEA-SPAS» was sent to the scene. Upon arrival, it was found that it was not possible to remove the Toyota car from the snow drift due to bad weather conditions. All citizens who were in the car were evacuated from the Karabi-Yaila plateau on off-road vehicles and taken to the city of Belogorsk. No one needed medical assistance , — the press service of the Russian Emergencies Ministry in Crimea announced the details of the incident.

Besides, in 23: 10, in with. Zarechnoye, Simferopol district, employees of the Simferopol ASO GKU RK «CRIMEA-SPAS» assisted in the evacuation of an ambulance heading to the patient.

Find out more:  Weather in Crimea on May 27

Due to unfavorable weather conditions, the Ministry of Emergency Situations of the Republic of Crimea recommends that you observe the following security measures:

refrain from going to the sea and inland waters;

Wearing shoes with non-slip soles, move carefully, take your time, taking into account the unevenness of the surface ti.

Detailed weather forecast for cities and towns of Crimea — here101.

On the Ai-Petri plateau and the Angarsk pass, vacationers are injured and lost