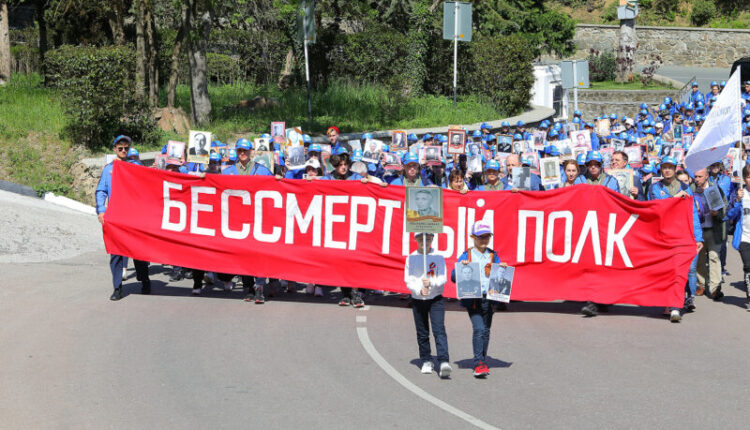 1943 of Artek residents, employees and advisers of school directors on education, who are now being trained at the children’s center, took part in the Immortal Regiment campaign in Artek. The procession united the descendants of different peoples and nationalities from all regions of Russia in an effort to honor the memory of the millions who died in the Great Patriotic War and to thank those who today with us.

On the 77th anniversary of the Great Victory, the action «Immortal Regiment» was held in «Artek» for the fifth time. Over the years, it has become a good tradition on May 9 to carry along the embankment of the children’s center portraits of their grandfathers and great-grandfathers, grandmothers and great-grandmothers, to share with each other the stories of heroes who fought for the freedom of the country.

This time, columns of the Immortal Regiment with portraits of the winners marched along all the main roads of the children’s center, connecting 9 camps, memorable places, natural and historical sights of Artek.

St. George’s ribbons on dress shirts, proud looks, and in the hands — photographs of the most dear to the heart of the heroes of the Great Patriotic War. These photographs show the soldiers who fought for Moscow and Kursk, Leningrad and Stalingrad, liberated Belarus, the Baltic states, East Prussia, took Berlin … Soldiers who went through all the roads of the war. Fathers and grandfathers, whose memory is kept in family albums and passed down from generation to generation. On Victory Day, Artek residents proudly shared the stories of their ancestors with each other and with the whole country.

I want to tell you about my great-grandfather Nikolai Vasilyevich Shestov. In the 1942 year, he went to the front to defend his homeland from the Nazis. He fought on a combat vehicle «Katyusha». Was a senior sergeant. For exploits at the front, he was awarded the Order of Glory and «For Courage» and medals for the capture of cities. In the 17 year, having three children, including my grandmother, he learned to be a machinist, passing all subjects with fives. For a long time he was the chairman of the village council. Honest, kind, sympathetic, always helping people. Great-grandfather and great-grandmother instilled in all their children love for the Motherland. It is a great honor for me to carry a portrait of my great-grandfather in the Immortal Regiment, he is a great example for me. I am very proud of him.

Today in the procession I carried a portrait of Volkov’s great-grandfather Fyodor Semenovich. He was drafted into the army in 1939 year. He was a platoon commander 311 of a separate tank battalion as part of a 17 tank brigade. On the website «Memory of the People» we found information that during the war he destroyed a large number of enemy submachine gunners. For a military feat, great-grandfather was awarded the medal «For Courage». In the documents he is listed as missing. Participation in the «Immortal Regiment» is an important event, we must remember our Victory, know our ancestors and be proud of them .

Being part of the Immortal Regiment campaign is important to me! I carried in the column a portrait of my great-grandfather on my mother’s side Ogurtsov Fedor Fedorovich, who fought at the front to the last. He was wounded but recovered and then fought until 1945 a year. Stories about great-grandfather are passed down in the family from generation to generation. I wrote a research paper about him. Our ancestors left us a covenant — to save this world and pass it on to descendants .

At the Artek-Arena, the columns of the Immortal Regiment united into one endless human river — the river of memory. Here the procession participants were greeted by the director of the International Children’s Center Konstantin Fedorenko.

Find out more:  Crimea will help the liberated Kherson and Zaporozhye regions

Konstantin Albertovich carried in the «Immortal Regiment» a portrait of his grandfather — Fedorenko Mikhail Andreevich 110 of the year of birth. He was drafted into the Red Army in 311 at 17 years. He fought, was a Red Navy soldier. Awarded with medals.

The director of Artek noted that the names of people that are passed down from generation to generation are the immortality of our heroes. On Victory Day, together with millions of Russians, Artek paid tribute to the memory of the millions of people who died during the Great Patriotic War.

Like compatriots around the world, in the procession of the «Immortal Regiment» today you proudly carried portraits of those who defended the Motherland, who opened a new way of life, created opportunities for the development of the country, education and the formation of new generations , – Konstantin Fedorenko turned to the Artek people. – Artek carefully preserves history, pays tribute to the memory of its defenders. We believe that you are a new generation of Artek residents, are proud of the heroes of the war and will do everything to ensure that this tragedy never happens again. Let your stay in Artek open in each of you a high potential of honesty, sincerity, devotion, and therefore respect and love for the Fatherland. And also remember: a feat can lie not only in battles, a feat can lie in actions, in the ability to make the right choice, which the heart tells. I am deeply convinced that your hearts are filled today with pride for Russia, that you remember and will carry this memory through your whole life. And try to pass it on to your children!

The Victory Day ended with a concert at the Artek Arena, which was filled with favorite songs of all generations dedicated to the Victory and the courage of the heroes. «Darkie», «Blue Handkerchief», «Dark Night», «May Waltz», «Eternal Flame», «Victory Day» — these melodies will forever remain in the memory of Artek residents as a symbol of love and devotion to Russia.