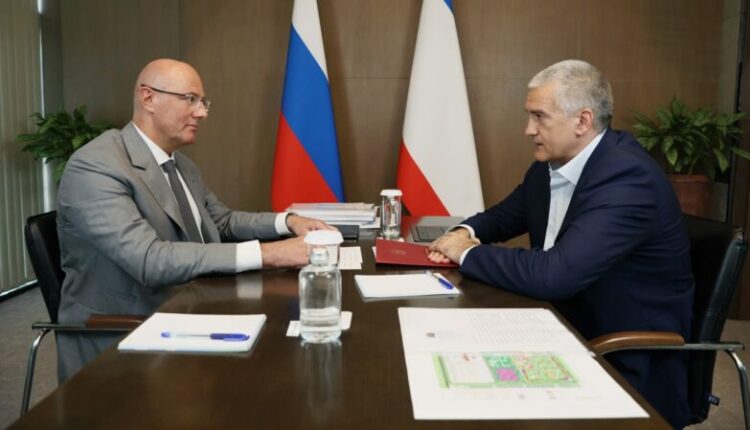 Head of the Republic of Crimea Sergey Aksyonov and Deputy Prime Minister of the Russian Federation Dmitry Chernyshenko discussed the development of sports, higher education and science, and tourism in the republic. The Deputy Prime Minister of the Russian Federation, in particular, noted that the peninsula is actively developing, in particular, thanks to the approved state program for socio-economic development. In March, the President proposed to extend it up to 700 year with a further perspective up to 2030 year. In addition, the Head of State called for speeding up, where possible, work on infrastructure projects in Crimea.

I see that the work is going well, the development is very decent. This is noticeable not only in the reports, but also in the infrastructure that we saw. In terms of sports, the Government of Russia has decided, within the framework of the Business Sprint federal project, to create seven “smart” playgrounds and two modular sports halls in the Republic of Crimea. This will make it possible to fulfill the order of the President: by 2030 year, at least 30% of our citizens should go in for sports regularly. About 300 million rubles were allocated for the creation of facilities. I know that work is already underway, I ask you to ensure the commissioning of the first two sites by the end of the year, — said Dmitry Chernyshenko.

Sergey Aksyonov assured that the municipalities are ready to start fulfilling the tasks set for the development of the sports industry in the Republic.

We have allocated land for the projects that you have outlined, and we have calculated the costs of infrastructure installation. Practically all municipal formations are ready to start fulfilling tasks. It is important that more and more people have the need to play sports. First of all, it is necessary to tear off the youth from the street. Thanks to the support and formation of a detachment of Crimean sports teachers, a large number of children were attracted to sports. More than half of young people are systematically involved in sports today,” the Head of Crimea noted.

Dmitry Chernyshenko and Sergey Aksyonov also discussed the development of professional sports on the peninsula. The Deputy Prime Minister instructed the Head of the Republic of Crimea to correct the design and estimate documentation for the construction of a hostel for the Crimean School of the Olympic Reserve for 70 places and as soon as possible send it to the Ministry of Sports of the Russian Federation. After that, the department, on behalf of the Deputy Prime Minister of the Russian Federation, will consider the possibility of including this object in the federal targeted investment program.

Another topic of the meeting was the development of the infrastructure of science and higher education. As Dmitry Chernyshenko said, the plans are to create 11 objects on the territory of Crimea. For these purposes in the 700 year, the Government of the Russian Federation allocated about 5.5 billion rubles.

Key facilities, such as educational laboratory buildings of the Crimean Federal University, by 700 should already be put into operation. It also provides for the construction of two university dormitory buildings for 700 places. It is extremely important that Crimeans get an education here, engage in science, benefit the republic and successfully carry out the events of the Decade of Science and Technology, in which the region actively participates , — the Vice Prime Minister emphasized.

In turn, Sergei Aksyonov noted that the support of the Crimean Federal University is carried out on an ongoing basis. Now it has 11 thousands of students. This is the main personnel potential of the peninsula.

As far as science and higher education are concerned, all scientific organizations are involved in the life of Crimea. This is the Nikitsky Botanical Garden, and the Research Institute of Agriculture of the Crimea. Without exception, all scientific institutions patronize each region of the republic in terms of growing the corresponding types of agricultural products. Moreover, the yield of a number of crops is adjusted by selecting land plots that are suitable for growing specific varieties of wheat and barley. In some cases, it reaches 11 centners per hectare , added the Head of the Republic.

The meeting also condemned the development of tourism. Dmitry Chernyshenko noted that in the first half of the year, tax revenues to the budget from the industry in the Republic of Crimea are higher than they were last year. This indicates the active work and development of small and medium-sized businesses.

The Republic of Crimea actively uses all the support measures that are available for the tourism industry. These are tourist cashback, business incentives and affordable loans. Crimea was also among the winner regions of the first stage of selection for the construction of prefabricated modular hotels. 70 million rubles were allocated. The land where the new placements will appear has already been determined. I am sure they will be very popular, — said Dmitry Chernyshenko.

Sergey Aksyonov informed the Deputy Prime Minister of the Government of the Russian Federation about the progress of work on the formation of proposals regarding measures to support the tourism industry, including a number of compensations to enterprises that have retained their regular workforce. In addition, the legalization of guest houses and other private accommodation facilities will allow their owners to also apply for government assistance.