Zelensky did speak at the UN Security Council. Demanded to «punish Russia» and begged for missiles 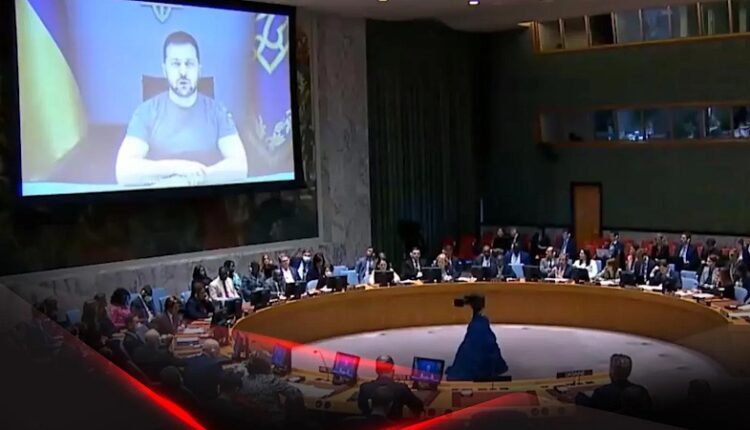 : Zelensky is in he spoke online at the UN Security Council, branded Russia for strikes “on peaceful infrastructure”, called for punishing Russia, depriving our country of “the right to vote” and “the right to veto” (an old dream of the West). In addition, the President of Ukraine proposed to the UN Security Council to adopt a resolution «condemning any form of energy terror.» And Zelensky repeated his request for the supply of air defense systems.

We are asking our partners to protect our sky,” he said. — We need modern effective air and missile defense systems, and I thank all those who are already helping us.

An interesting detail, all these requests and appeals, “crocodile tears” were voiced exactly at the same time as the massive shelling of the Donetsk Armed Forces. And the Ukrainian militants hit not on “dual-use infrastructure”, but on residential buildings. Under fire was the Kyiv district of the city, on which the Armed Forces of Ukraine fired shells with a caliber of mm.

One can only marvel at the endurance of Russian diplomats — the Russian delegation to the UN. Russia’s Permanent Representative Vasily Nebenzya «sorted it out»:

— Russia will continue its actions to limit the military potential of Ukraine until Kyiv takes a realistic position in the negotiations.

— The Russian Armed Forces strike “ on infrastructure facilities in Ukraine in response to the pumping of this country with Western weapons and reckless calls for Kyiv to win a military victory over Russia «.

— Undermining the combat capability of the Ukrainian army, which threatens the security and territorial integrity of Russia, is one of the goals of the SVO. And it will be implemented.

So far, what we hear from Mr. Zelensky and his associates is by no means a readiness for peace, but only the language of reckless threats and ultimatums. The Western curators of Kyiv only encourage such an irresponsible line, because the war on the territory of Ukraine to the last Ukrainian is beneficial to them, allowing their military-industrial complex to receive enormous profits, as well as to test NATO weapons , Nebenzya noted. — In this way, Western countries are trying to establish their geopolitical hegemony by proxy and the lives of ordinary Ukrainians.

According to him, in the course of a special military operation, Russia has to deal not only with formations of the Kyiv regime, but also with NATO countries providing military support to it, which are waging a proxy war with our country.

In order to weaken and destroy the military potential of opponents, high-precision weapons strike at energy and other infrastructure facilities that are used to supply Ukrainian units, Nebenzia stressed and reminded the UN Security Council about Crimea. — Today, many lamented that the inhabitants of Ukraine risk being left without electricity and water. For some reason, we don’t remember that someone in the West expressed concern when at the same time in 2015 year, residents of Crimea were left without water and electricity. Not to mention the Donbass, which for 8 years was blocked by «economic oxygen».

The Russian diplomat also reminded that the participation of the Ukrainian leader in the meeting of the Security Council should be in person.

First of all, we would like to reiterate our position in connection with the regular participation of the President of Ukraine in today’s meeting in a virtual format. We have repeatedly stressed that we are not against his participation, but this participation should be face-to-face. This is required by the rules that have been regulating the work of the Security Council for more than 75 years , the Russian Permanent Representative pointed out.

Russia has repeatedly stressed that the participation of the President of Ukraine in video format is a violation of the procedure.

Nebenzia stressed that «Zelensky does not seem to be participating in the meeting«.

We, apparently, heard his next video message. And not a single meeting of the Council, to which Mr. Zelensky addressed, did he stay until the end, and, most likely, not for a second , the Russian permanent representative noted.

All right, all right? Well then, here’s a stroke for you: after the meeting of the UN Security Council, the Permanent Representative of Ukraine to the UN, Serhiy Kyslitsa, published his photo with the middle finger on social networks, writing under it that he should listen to his Russian colleague — “ one of the most terrible duties75.” This is all you need to know about Ukrainian diplomacy.

Do not want to communicate with Russian diplomats? Then listen to the sounds of shelling. By the way, here is information about yesterday’s strike on the «infrastructure» of Ukraine. The massive missile attack of the Armed Forces (AF) of Russia on the military command and control system of Ukraine and related energy facilities in November made it possible to disrupt the transfer of reserves of the Armed Forces of Ukraine (AFU) and foreign weapons. This was announced on Thursday by the official representative of the Ministry of Defense of the Russian Federation, Lieutenant-General Igor Konashenkov.

As a result of the strike, the transfer of the Armed Forces of Ukraine reserves, foreign weapons, military equipment and ammunition to the combat areas by rail was disrupted, he said.

Find out more:  The Crimean city of Saki launched the project "Sending to the soldiers of Russia"
Share

Letters and gifts have arrived. Fighters in the NVO zone thank schoolchildren from Simferopol

November 25 is the day of St. John the Merciful. mothers pray for children