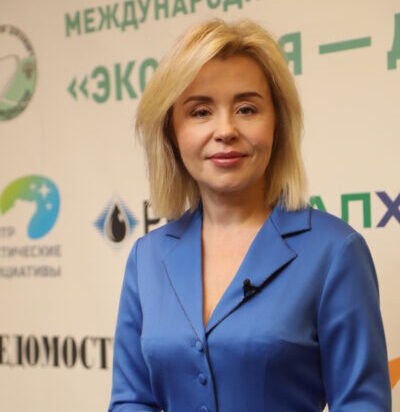 The jury of the II International Children’s and Youth Prize «Ecology is everyone’s business» announced the results of this year’s Prize. Uliana Chmykhun from the village of Aromatnoye, Belgorod District, Republic of Crimea, won first place in the Ecoblogger nomination with the video Lifehacks from Grandpa.

Uliana Chmykhun prepared a story for participation in the International Children’s and Youth Prize «Ecology is everyone’s business» about how her grandfather copes with excess grass in summer: he feeds animals with grass, retains moisture for grown plants and helps turn food waste into excellent compost. ). Ulyana’s video won first place in the Ecoblogger nomination among the works of children aged 6-9. Metelkin Vladimir ( from Sevastopol won the Prize for the story about the shops that are located in the city parks of his hometown. These benches are made of plastic collected in the Crimea and Sevastopol. They are durable, weather resistant and do not require painting ().

According to the results of the work of the jury, the Grand Prix of the Prize was awarded to 15-year-old Boris Glushak from St. Petersburg for environmental project «Photobioreactor» Kaskad-1 «- an innovative development on the use of microalgae Chlorella vulgaris, which allows you to get oxygen from carbon dioxide and humidify the air. Boris presented to the jury several of his developments, including those made especially for the Prize.

The Second International Children’s Service Award showed great dynamics, strong competition and high quality of work. The Ecoproject and ESG Generation nominations revealed the real stars of the project and, I hope, future ecologists and scientists. For example, eight-year-old winner Artem Yamalov from Ufa presented a rain garden project to save water. First place winner Igor Leman from the Nizhny Novgorod region invented the Ekoumnitsa mobile station for compost processing, and a test sample has already been installed at his school. Polina Pavlova from Primorsky Krai, who won first place, proposed a unique development for the purification of industrial waters from industrial enterprises using artificial geochemical barriers. Nine-year-old Albina Korotonozhkina from the Belgorod region, who became an active participant and sent many useful educational videos, came up with a digital clothing collection. The winner Vladimir Matyushkin from Armavir presented the All-Russian draft environmental emblem for the Prize, — said Svetlana Radionova, head of Rosprirodnadzor, who initiated the award.

According to her, children sent a large number of creative works to participate in the award: they came up with rap, sang songs, composed their own poems and created dances, and many of the works were done at a high level.

For example, ten-year-old Milana Timoshenko from the Moscow region, who is participating in the Prize for the second year, simply shows by her example what the ecology of the soul is. The girl constantly trains, hardens and conquers new heights in the truest sense of the word. Last year, together with their friend Amir Zakrailov and their fathers, they made an ecological swim «For Clean Baikal». This year, the families conquered Elbrus and carried out some kind of plogging on the way to the goal, — said the head of Rosprirodnadzor.

Rustam Romanenkov, Deputy General Director of the ANO Center for Arctic Initiatives, noted that all participants, prize-winners and winners of the Prize say the same thing in their works: ecology is everyone’s business.

For some it’s a cartoon, like, for example, -second animation called “Look into the eyes of your fur coat” by Masha Orlova from Yekaterinburg, for some it’s rap, and for someone it’s the creation of an electric shop, as for Rodion Trunov from Novosibirsk , — said Rustam Romanenkov.

source: press center of the International Children’s and Youth Prize of Rosprirodnadzor «Ecology is everyone’s business»

Find out more:  Cat Bridge has a birthday today

A resident of Yalta took part in the new stage of the show «NEW DANCES» on TNT. We do not abandon our own — we are sick!